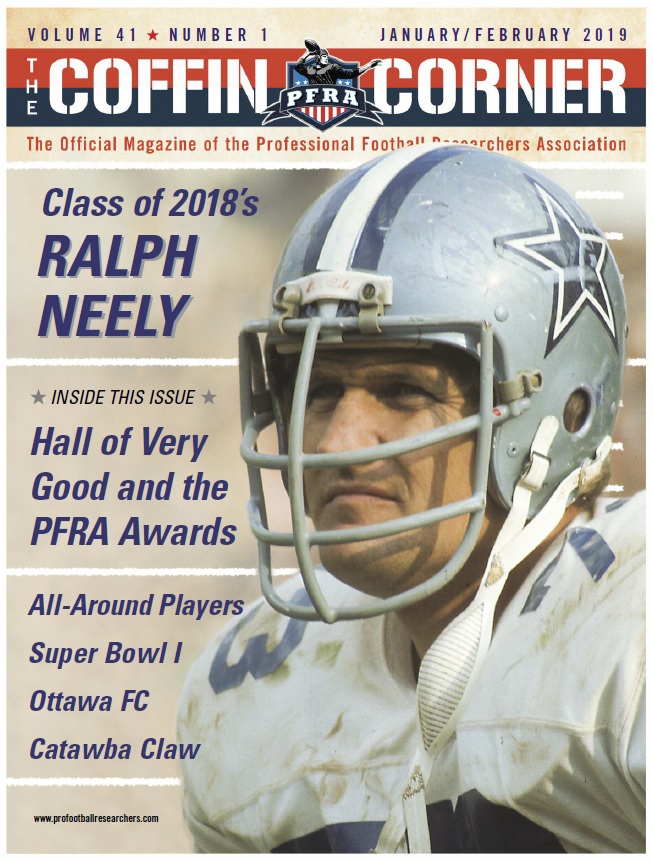 PFRA-ternizing The executive director gives his state of the PFRA address to the members, listing the accomplishments of the organization for 2018 and provides a look ahead to 2019.

2018 PFRA Awards. The winners are officially announced with John Turney receiving the Ralph Hay Award for lifetime achievement, Doug Farrar as the recipient of the Nelson Ross Award for his book The Genius of Desperation: The Schematic Innovations that Made the Modern NFL, and Greg Tranter winning the Bob Carroll Memorial Writing Award for his article Well-Traveled: NFL Players That Have Played in the Most Pro Football Leagues.

Pro Footballs Renaissance Men: The Twilight Decade of the 1960s by Ryan C. Christiansen. A listing of all the NFL players from the Sixties onward who have achieved an all-around, that is completed a pass, ran with the ball, kicked the ball, and caught a pass in a single contest, with the versatile Paul Hornung at the top by attaining this feat in ten games.

Super Bowl I Drive Chart by Richard Durr. A visual representation of the first AFL-NFL World Championship Game between the Packers and the Chiefs showing the game flow, momentum changes, and both teams drive distances and time, all on a single page.

The Disgrace of the Ottawa Football Club by Robert Sproule. A look back at the team with the well-earned nickname of "Rough Riders," who played a brutal style of the football in the Quebec Rugby Football Union in 1897rough enough to be suspended for that season.

Bucky Pope: The Catawba Claw by Tom Laemlein. A short biography of the wide receiver who attended a small college in North Carolina, would go on to have a remarkable rookie season in 1964 with the Los Angeles Rams, and was unable to duplicate it due to injury the next year. 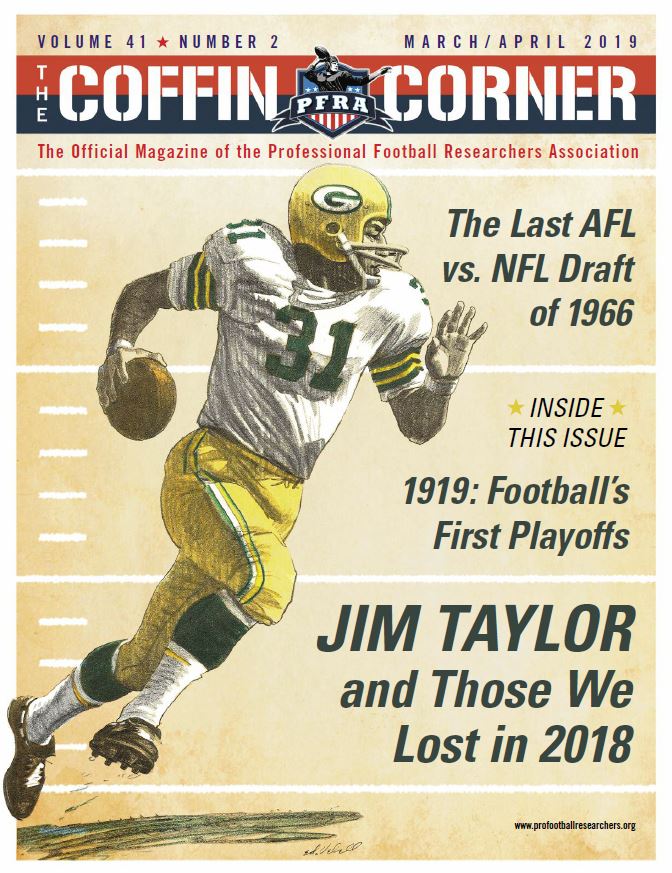 PFRA-ternizing. The column features news on the passing of longtime PFRA member Fausto Batella of Italy, an announcement on the creation of the PFRAs Instagram account (@pfra_photos), a brief explanation on the recent absence of the editor-in-chief and a look at the very first issue of the Coffin Corner on the publications 40th anniversary.

The Final Battle: The 1966 AFL-NFL Drafts by John Maxymuk. A history of the last competitive drafts between the two rival leagues, both held on the same Saturday of Thanksgiving weekend in 1965 and including two expansion teams for each league (the NFLs Atlanta Falcons and the AFLs Miami Dolphins), before the merger agreement and the first common draft of 1967.

3/29/19: The First Championship Game by Mark L. Ford and Massimo Foglio. The story of the American Expeditionary Force (A.E.F) football playoffs and championship that took place among the U.S. troops stationed in Europe after World War I under the orders of General "Black Jack" Pershing along with a detailed account of the title game featuring Hall of Famer George "Potsy" Clark leading his team to victory as a player.

2018 Player Deaths. A list of the pro football players who died last year, including information on the team(s) they played for, the date and location of their death (if known) and their age when they passed away.

PFRA-ternizing. An update on the candidates and deadlines for PFRA elective offices in 2019, the official announcement of the weekend of June 1821, 2020 for the PFRA Convention in Canton next year and birthday wishes for the PFRA at 40.

Present at the Creation: An Interview with Joe Horrigan on the Founding of the PFRA by Ken Crippen. The retiring executive director of the Pro Football Hall of Fame speaks on the founding of the organization and his memories of those early days of the PFRA and those who were at that first meeting in Canton, Ohio.

The Battle of the Decade: The 40th Anniversary of Super Bowl XIII by J. Brian Ross. A look back at the 1979 Cowboys vs. Steelers rematch of Super Bowl X that would become the most-watched sporting event in television history at the time and a key moment in deciding the NFL team of the Seventies.

The Modern Stadium Explosion: From the 1960s to the Present by Patrick Gallivan. A brief history of the era of multi-purpose and football stadium construction that began with the Houston Astrodome in 1962 and including the NFL stadiums that opened in this decade. 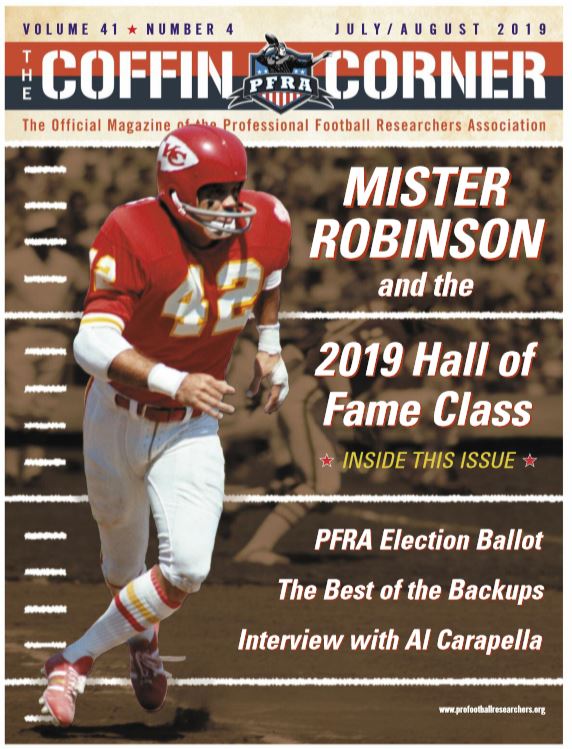 PFRA-ternizing. The candidates for the office of President of the PFRA release their statements on their vision of the future of the organization.

Official PFRA Elections Ballot. Note that the deadline for voting is October 31, 2019.

The NFL’s Greatest Backup Quarterback by Mark A. Sullivan. A biography and career overview of Earl Morrall, who played in the league for 21 years, won an NFL title, an MVP award and was a member of three Super Bowl champion teams.

Quick Hits with Al Carapella by John Vorperian. A freewheeling interview with the former Pro Bowler and San Francisco 49er from the Fifties that includes biographical details of the 90-plus-year-old ex-player. 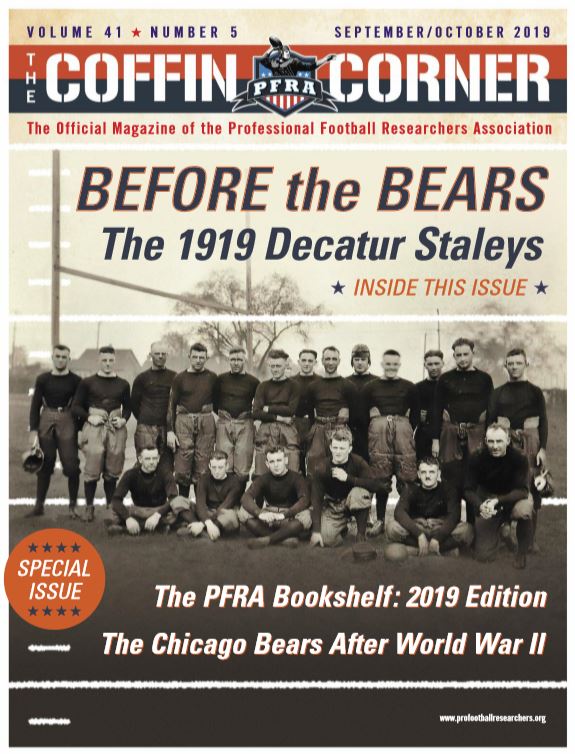 PFRA-ternizing. An update from George Bozeka on the 2020 PFRA Convention at the Pro Football Hall of Fame in Canton, Ohio from June 18–21 next year that will celebrate the 100th anniversary of the founding of the NFL, including information on the special hotel discount and a list of events and speakers.

Before the Bears, Before Halas: The Decatur Staleys by Chris Serb. A history of the early years of the A.E. Staley Manufacturing Company’s industrial team that was founded in 1919 and would become the Chicago Bears, including the firm’s fortuitous hiring of George Halas as an employee and player-coach in 1920.

Un-Bear-ably Close: Chicago’s Many Near Misses of the Post-War Era by Andy Piascik. The Bears—along with the rival Packers—dominated the early years of the NFL, winning seven NFL titles in the 25 years since their first championship in 1921. But they would not win another league title until 1963. This is a recounting of the close calls and agonizing finishes of the club after World War II.

2019 PFRA Bookshelf by John Maxymuk. A bibliography of books on professional football (with a few notable exceptions) published or scheduled to be published in 2019, with highlighted titles by PFRA members. 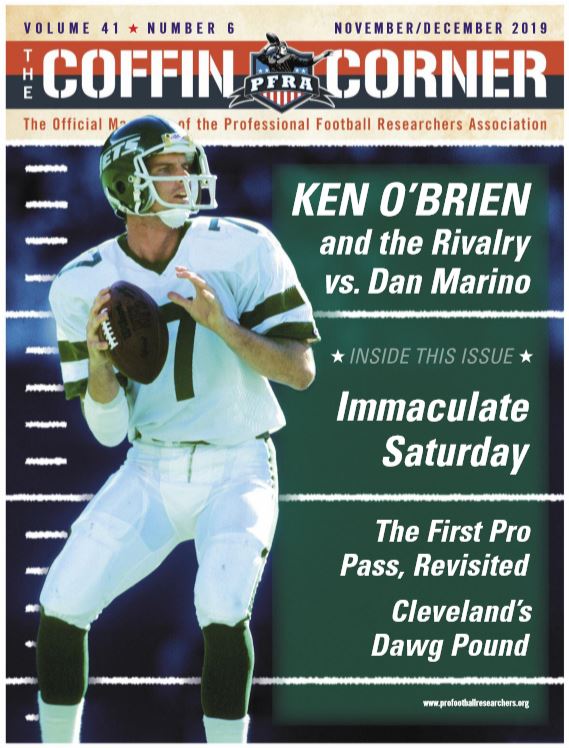 PFRA-ternizing. An update from George Bozeka on the 2020 PFRA Convention at the Pro Football Hall of Fame in Canton, Ohio from June 18–21 next year that will celebrate the 100th anniversary of the founding of the NFL, including information on the special hotel discount and a list of events and speakers. Also, PFRA election results.

The Unlikely Rivalry: Ken O'Brien vs. Dan Marino by Jon Taub. A look at the two of the quarterbacks from the famed draft class of 1983: Ken O'Brien and Dan Marino. How did their careers turn out and how did they fair against similar competition?

Immaculate Saturday: One Glorious Day, Two Magnificent Games by Brad Schultz. Everyone remembers the Immaculate Reception. Do you remember the Dallas-San Francisco game from the same day? The one where Dallas rallied for 17 points to beat the 49ers to advance to the NFC Championship Game? This article is an analysis of why one was revered and one is all but forgotten.

The First Pro Pass, Revisited by Ken Crippen. In 1979, Bob Carroll wrote an article on the first documented forward pass. A group of researchers have found two additional passes that occurred prior to Bob's documented pass.