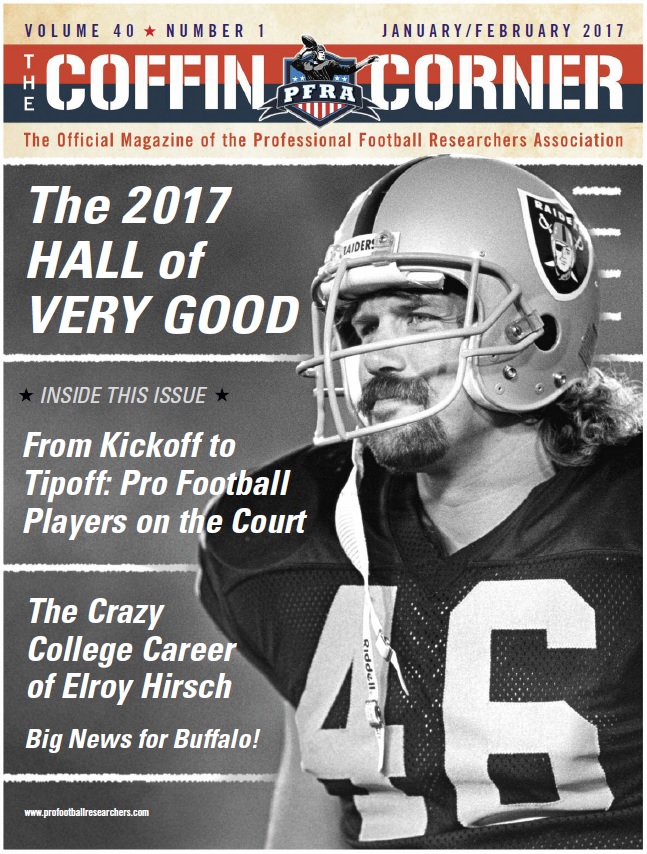 PFRA-ternizing The executive director gives his state of the PFRA address to the members, listing the accomplishments of the organization for the past year and provides a look ahead to the future. Also there's a big announcement about the 2018 PFRA Convention in Buffalo with the addition of Hall of Famer and former Bills running back Thurman Thomas as a guest speaker.

From Kickoff to Tipoff: Pro Footballs Notable Basketball Teams by Mark L. Ford. An account of pro football players who shed their cleats and laced up the high tops to represent their teams on the basketball court, including brief histories of the more prominent squads with lists of over 100 verified game scores and the top scoring players with 30 points or more in a contest.

The Crazy College Career of Elroy Hirsch by Matt Foss. A look back at the collegiate athletic achievements of Crazylegs Hirsch, who starred for two university football teamsWisconsin and Michiganand was a letter winner in an unprecedented four different sports in the same academic year for the Wolverines. 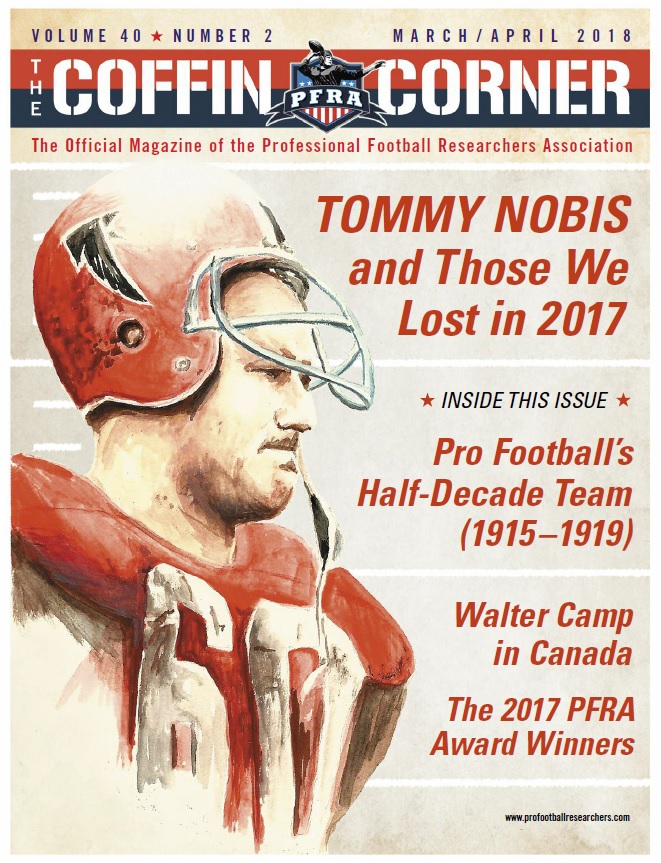 PFRA-ternizing. An update on the 2018 PFRA Convention in Buffalo, New York including the addition of two speakers to the schedule and the announcement of a free convention t-shirt to all attendees.

2017 PFRA Awards. The winners are officially announced with John Maxymuk receiving the Ralph Hay Award for lifetime achievement, Ralph Hickok as the recipient of the Nelson Ross Award for his book The Vagabond Halfback: The Saga of Johnny Blood McNally and John Wilke winning the Bob Carroll Memorial Writing Award for his article Who Was Really the NFLs First 1,000-Yard Rusher? The Case for Tex Hamer.

Pro Footballs Half-Decade Team, 19151919 by John Wilke. The author, using a methodology to rate individuals before All-Pro teams became commonplace, selects a starting lineup of the best players from the dawn of the professional game, including such greats as Pete Calac, Jim Thorpe, Greasy Neale and Norb Sacksteder.

The Canadian Factor by Robert Sproule. A description of Walter Camps trek north to witness a 1905 football match between the Toronto Argonauts and the Hamilton Tigers and the accompanying article written by Camp detailing his thoughts on the ten-yard rule that he proposed for the American game when he returned home.

2017 Player Deaths. A list of the pro football players who died last year, including information on the team(s) they played for, the date and location of their death (if known) and their age when they passed away. 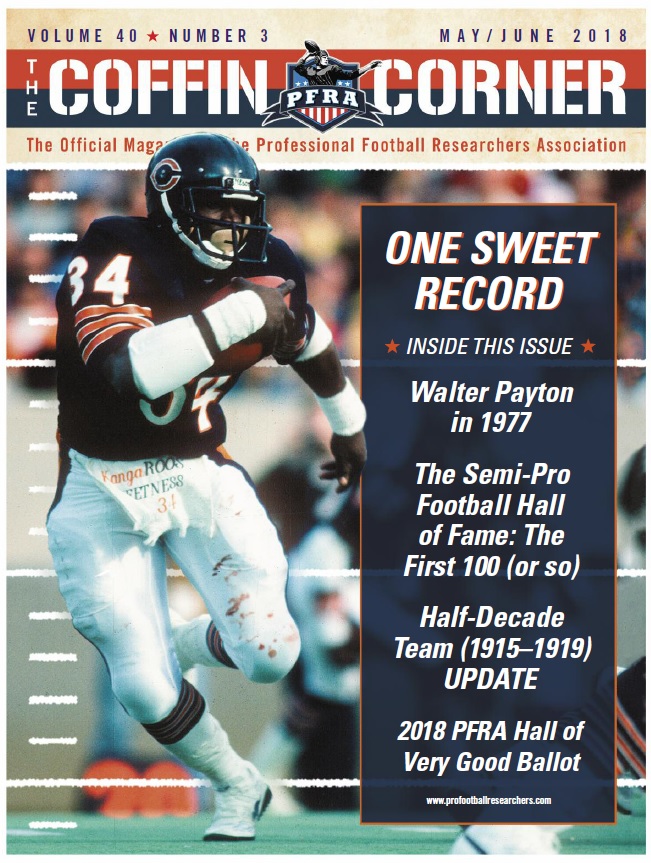 PFRA-ternizing. An announcement on the release of The 1958 Baltimore Colts, the second book in the Great Teams in Professional Football series, and a final update on the 2018 PFRA Convention in Buffalo.

Rushing for a Sweet Record: Walter Payton Runs to Glory in 1977 by Joe Zagorski. A look back at the day when the Chicago running back broke O.J. Simpsons single-game rushing record against the first place Vikings, willed his team to victory and kept the Bears in the hunt for the playoffsall while recovering from the flu.

Whats in a Name? An Update on the 1915-1919 Half-Decade Team by John Wilke. The author uncovers new information on the likely game appearances of Greasy Neale, one of the athletes on the Half-Decade first team, and the names of the second and third team members to conclude his list of the greatest professional football players right before the founding of the NFL.

The Semi-Pro Football Hall of Fame: The First 100 (Or So) Members, 1981-1989 by Mark L. Ford. An annual listing of the first 107 inductees in the American Football Associations Semi-Pro Hall of Fame, with brief biographies on the members of every class, including such names as Jim King Corcoran, Bob Kuechenberg and Otis Sistrunk. 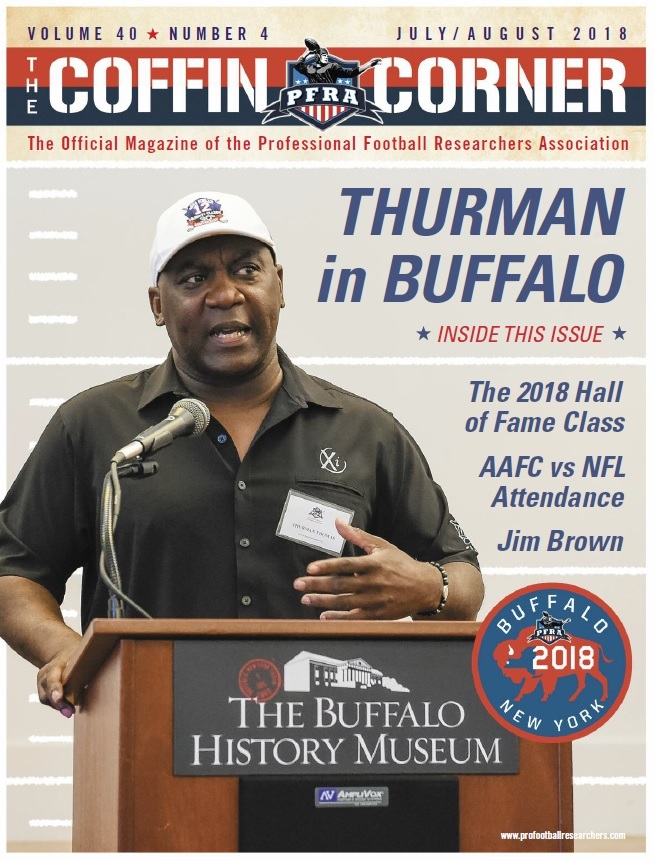 PFRA-ternizing. by George Bozeka. The organizer for the 2018 convention recalls the highlights of the weekend in Buffalo, including the official release of The 1958 Baltimore Colts: Profiles of the NFLs First Sudden Death Champions, the second book in the PFRA series on Great Teams in Pro Football History. Photographs by Mark Palczewski illustrate the recap of this event.

The Class of 2018 by the Pro Football Hall of Fame. A short biography, highlights, statistics and awards from the football careers of the members in this years Hall of Fame class: Bobby Beathard, Robert Brazile, Brian Dawkins, Jerry Kramer, Ray Lewis, Randy Moss, Terrell Owens and Brian Urlacher.

Jim Brown Dropped Six, Then Picked Up 110 by Brian Marshall. The story of how one of the greatest players in the NFL survived a pregame scare before the 1960 season finale against the Giants in Yankee Stadium and was still able to surpass the 100-yard mark, despite an injured ankle that plagued him throughout the year.

The AAFC vs. the NFL: The Attendance Myth by Kenn Tomasch. An examination of the popularity of the rival leagues from 1946 to 1949 and a detailed accounting of the attendance numbers from each year of the AAFC and the NFL, including those of every team from the two. 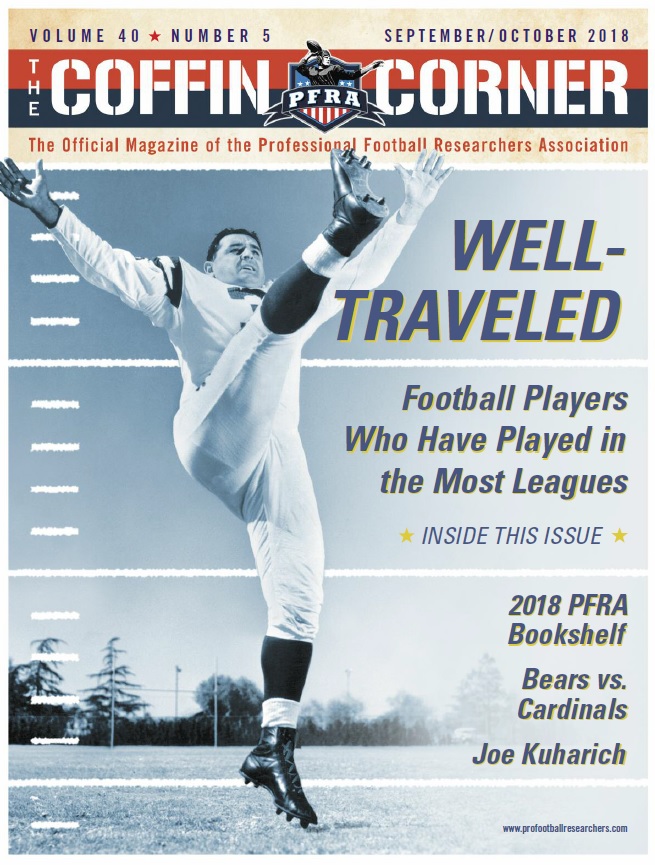 PFRA-ternizing. A milestone announcement of the 1,000 follower to the PFRAs official Twitter account and notices on the 60th anniversary of the 1958 Baltimore Colts season and the second book in the PFRAs Great Teams in Pro Football History series along with the upcoming 2020 PFRA Convention in Canton, Ohio to celebrate the 100th anniversary of the founding of the NFL.

Well-Traveled: NFL Players That Have Played in the Most Pro Football Leagues by Greg Tranter. A research report and listing of a group of 20 players that have played in five professional leagues or more with notable names including Ben Agajanian, Coy Bacon, Michael Bishop and Fred Jackson that played in leagues such as the AFL, the AAFC, the CFL, the USFL and the WFL. Short biographies of each player are included.

Coffin Corner Extra Point: An Interesting Conflict by Tracy Thibeau. The problem of game scheduling that faced the NFL arising from the fact that there were two teams in Chicago (the Bears and the Cardinals) before the Cardinals moved to St. Louis in 1960.

2018 PFRA Bookshelf by John Maxymuk. A bibliography of books on professional football (with a few notable exceptions) published or scheduled to be published in 2018, with highlighted titles by the PFRA.

Philadelphias Public Enemy Number One: Joe Kuharich by Mark A. Sullivan. A remembrance of a young Eagles fan attending a December 1968 game at Franklin Field where a despised coach wins a game against the Saints and loses out on the chance to draft Hall of Famer O. J. Simpson, all while a plane circles overhead with a banner reading "Joe Must Go." A brief biography of Kuharich is included along with the highs and lows of the Philadelphia franchise. 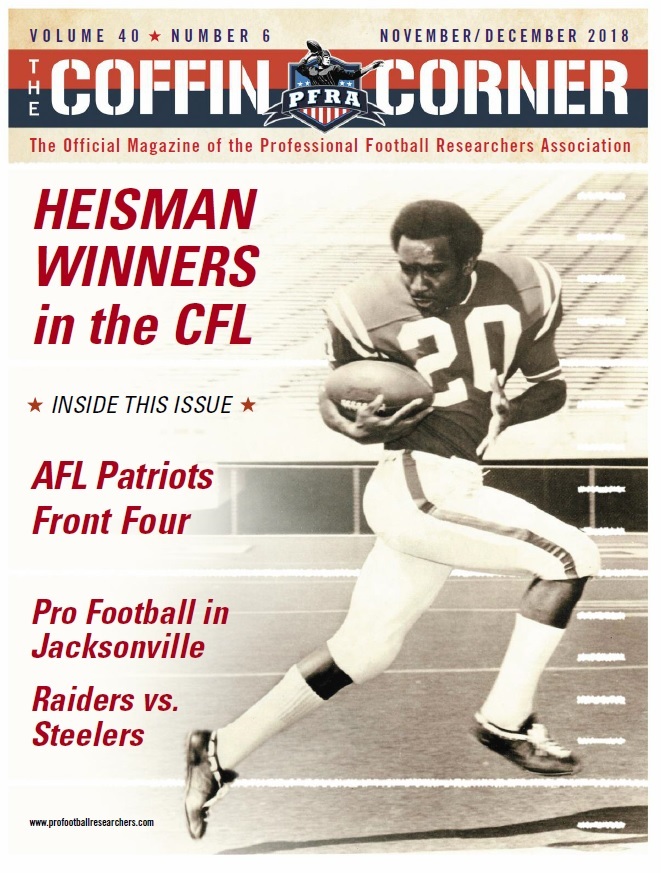 PFRA-ternizing. The inductees in the Hall of Very Goods class of 2018 are announcedLyle Alzado, Dick Anderson, Ken Gray, Lee Roy Jordan, Earl Morrall, Ralph Neely and Fred Smerlasalong with deadline reminders on the PFRA elections and membership renewals for next year.

The Great White North: Heisman Trophy Winners in the CFL by Randy Snow. Our aptly-named author examines the careers of the nine Heisman award winners who played in Canada and the varying degrees of success (or lack thereof) they experienced while there.

Jacksonville Before the Jaguars by Barry Shuck. A short history of professional football in the northern Florida city with teams from the WFL (Sharks and Express), American Football Association (Firebirds and Sunbirds), and USFL (Bulls) covered, as well as the beginnings of the current NFL franchise.

Nine Years of Dislike: Raiders vs. Steelers, 1972-1980 by Harvey Aronson. The bitter rivalry between the teams from Oakland and Pittsburgh in the Seventies is revisiteda rivalry born out of one of the most famous plays in NFL history.