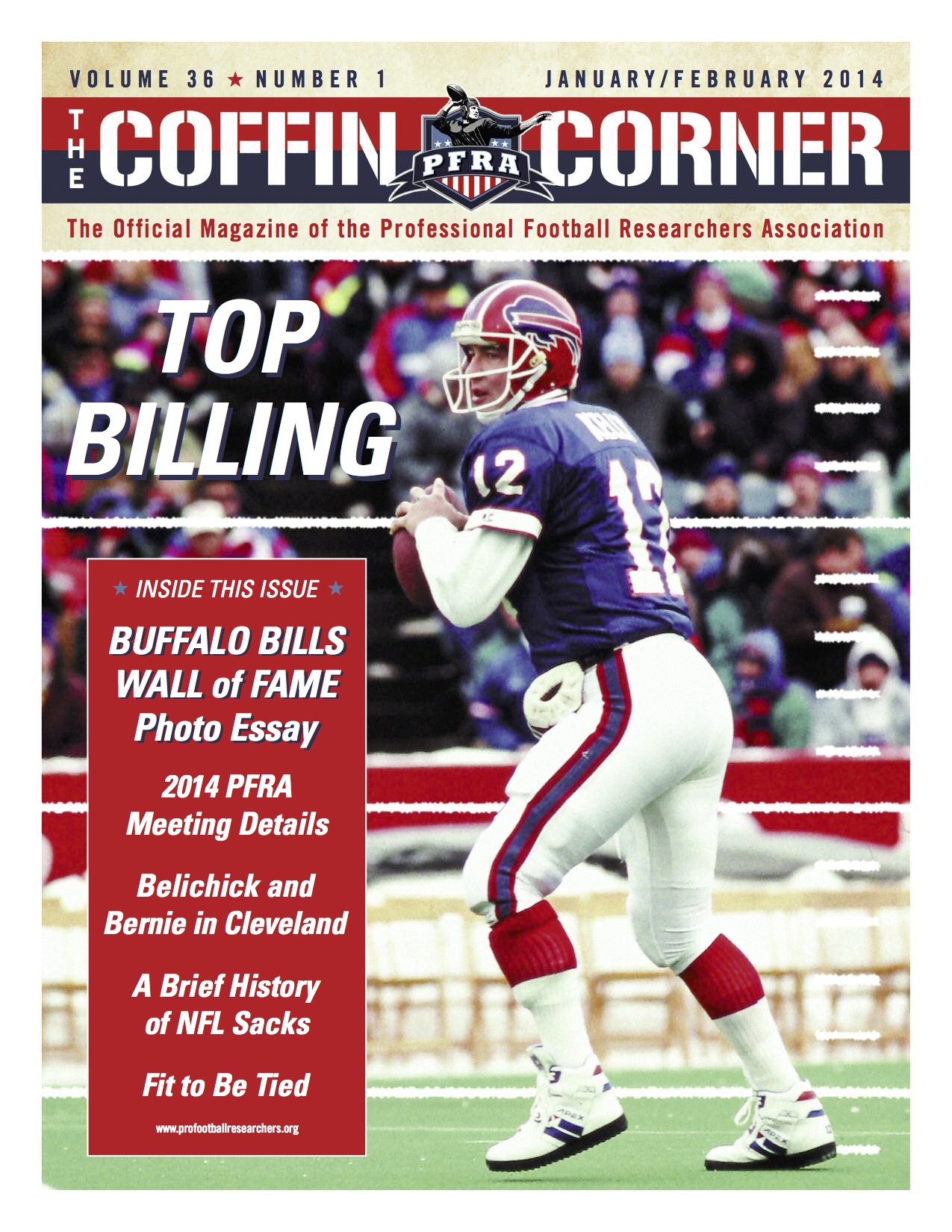 Buffalo Bills Wall of Fame Tribute (Photo Essay) - Mark Palczewski. The PFRA's official photographer was on the field at Ralph Wilson Stadium last fall as members of the Bills' Wall of Fame were honored.

PFRA-ternizing - Chris Willis. The new executive director of the PFRA delivers his annual report to the members and looks ahead to the new year.

2014 PFRA Meeting - George Bozeka. This year's meeting organizer fills us in on the events scheduled for the biennial get-together in Cleveland on June 6-7.

Belichick & Bernie in Cleveland - Roger Gordon. A tale of a difficult relationship between a declining hero of Ohio and an ambitious young coach in his first head coaching gig.

A Brief History of Sacks - Nick Webster. An analysis of pass rushers from 1982 up to 2011, that includes a formula and data to compare defensive players who played at different times in the official sack era.

Fit to be Tied - Dr. David B. Pushkin. A response to Mark L. Ford's article entitled The Ties that Bound in which it is argued that the NFL should return to the pre-1973 rules regarding overtime. 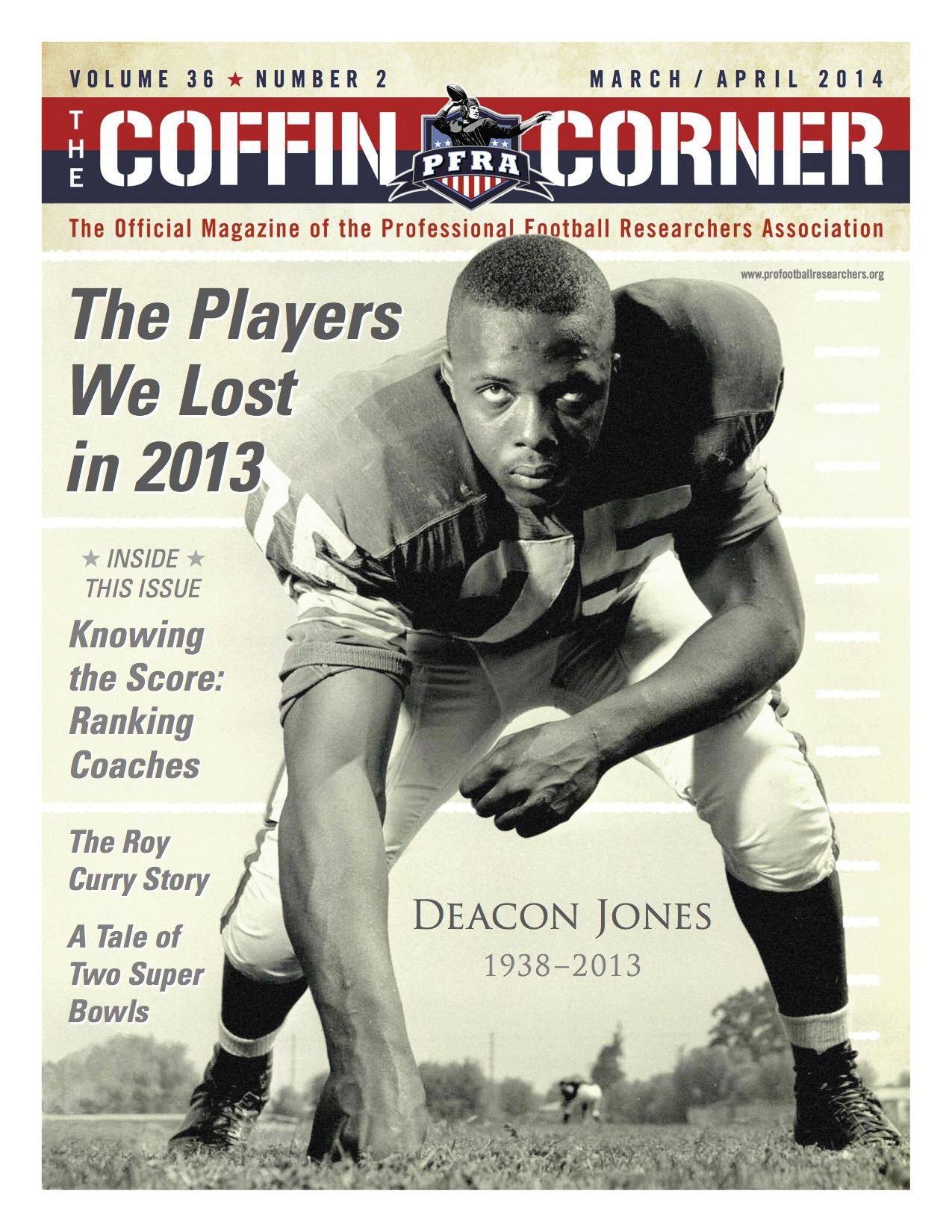 PFRA-ternizing. An updated itinerary for the 2014 PFRA meeting schedule in Cleveland and the official announcement of the 2013 PFRA award winners.

Knowing the Score: Coaches Ranked by Points Scored and Allowed by John Maxymuk. An analysis of pro football head coaches based on their team's offensive and defensive output in terms of points scored and allowed and margins of victory.

The Roy Curry Story by Seth Schwartz. A look back at the life and career of African American player Roy Curry, one of the more interesting "what ifs" of the NFL, drafted by the Steelers in 1963 as a wide receiver through he was an outstanding college quarterback.

2013 Player Deaths. A list of the professional football players who died last year including information on the team(s) they played for, the date and location of their death and the age when they passed away. 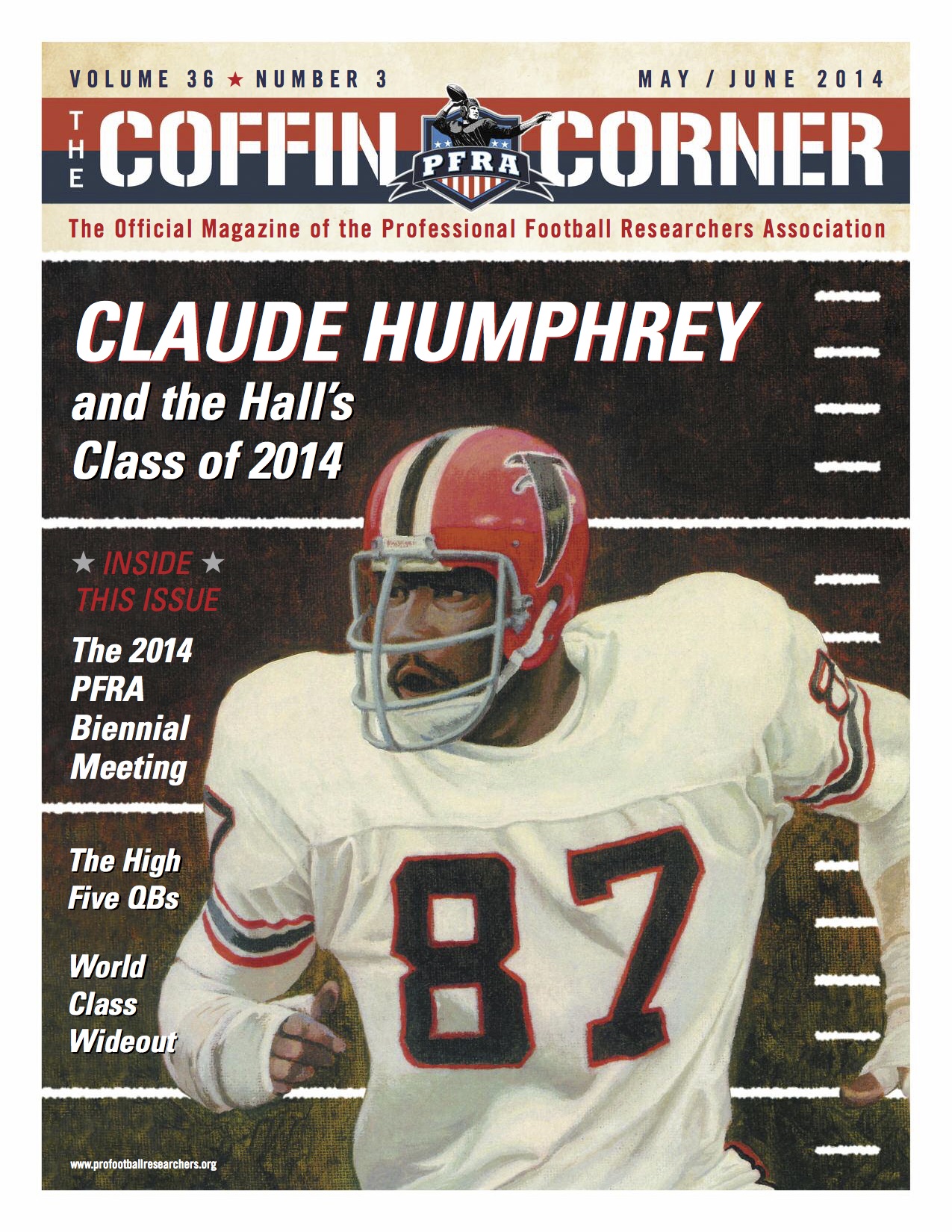 PFRA-ternizing by George Bozeka. The organizer for this years biennial meeting covers the highlights of the weekend in Cleveland including a celebration of the 50th anniversary of the Browns 1964 NFL championship. Photographs by Mark Palczewski illustrate this chronicle of the event.

The Class of 2014 by the Pro Football Hall of Fame. Highlights, statistics and awards from the football careers of the seven members in this years Hall of Fame class.

High Fives: A Comparison of Five Single-Season Passing Performances by Brian Marshall. An analysis of the record =-breaking seasons of five quarterbacksSam Etcheverry, Warren Moon, Dan Marino and Doug Flutiefrom both the CFL and the NFL and their statistical significance.

World Class: Paul Warfield by Roger Gordon. A look back at the football life of the Hall of Fame wide receiver, including interviews with Warfield and a recounting of his life and work after finishing his playing career. 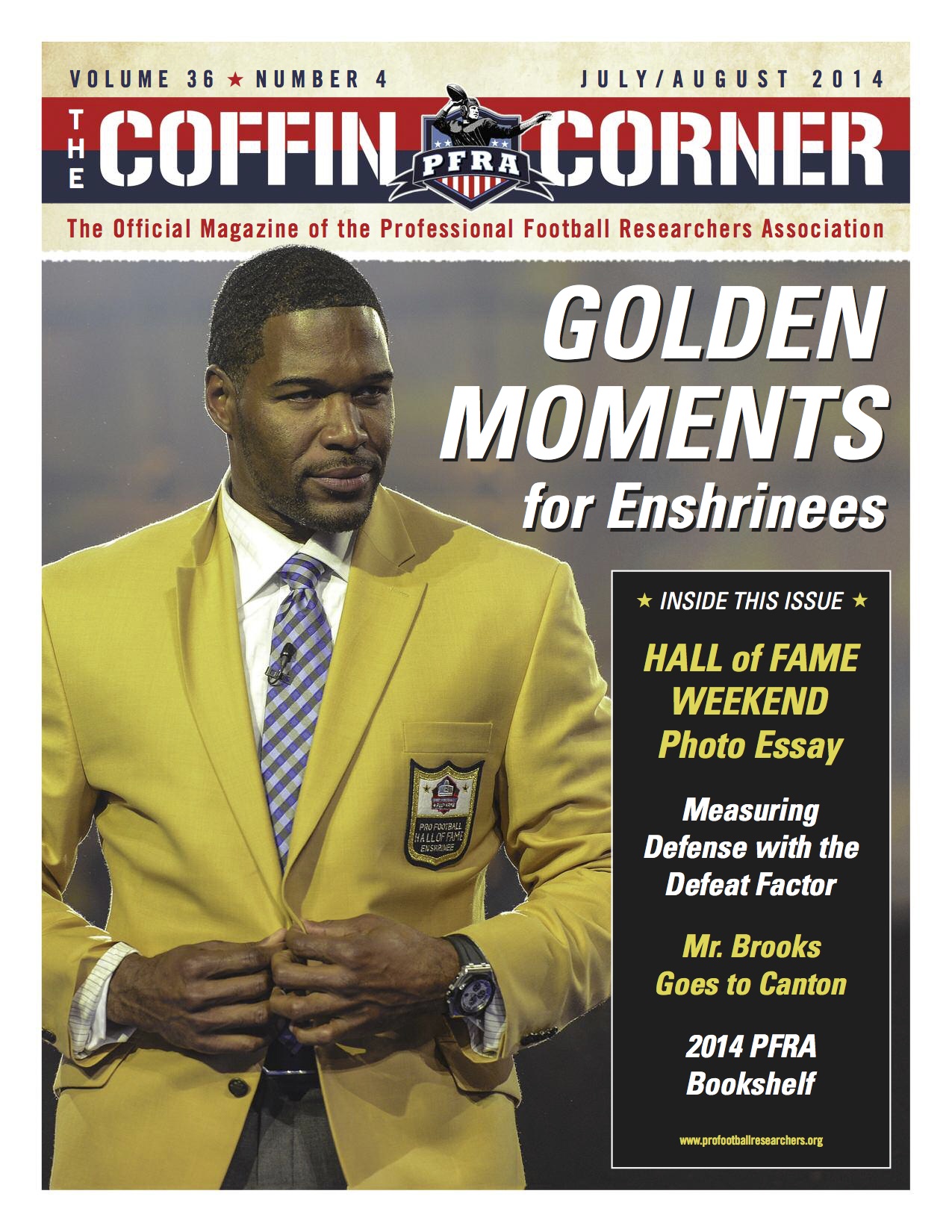 2014 Pro Football Hall of Fame Enshrinement Photo Essay by Mark Palczewski. Photographs from the Hall of Fame Weekend in Canton, Ohio by the official photographer of the PFRA.

PFRA-ternizing. A notice to the members on a special board of directors meeting, an update on the new webmaster and plans for the new PFRA website, a reminder for the Hall of Very Good balloting and a message to members on the need for contributions to The Coffin Corner.

The Defeat Factor: All-Around Defensive Prowess and J.J. Watt's 2012 Season by Nick Webster. An analysis of the defensive end's extraordinary sophomore season in the NFL and the creation of the Defeat Factor statistic (the harmonic mean of sacks and stuffs) to measure a defender's ability to make game-impacting negative plays.

Mr. Brooks Goes to Canton by Denis M. Crawford. An appreciation of the newly inducted Hall of Famer and former Tampa Bay Buccaneer Derrick Brooks, including an inside look at Hall of Fame weekend by the author while he served as a volunteer.

The 2014 PFRA Bookshelf by John Maxymuk. A bibliography of books on professional football published (or scheduled to be published) in 2014, including highlighted titles by PFRA members. 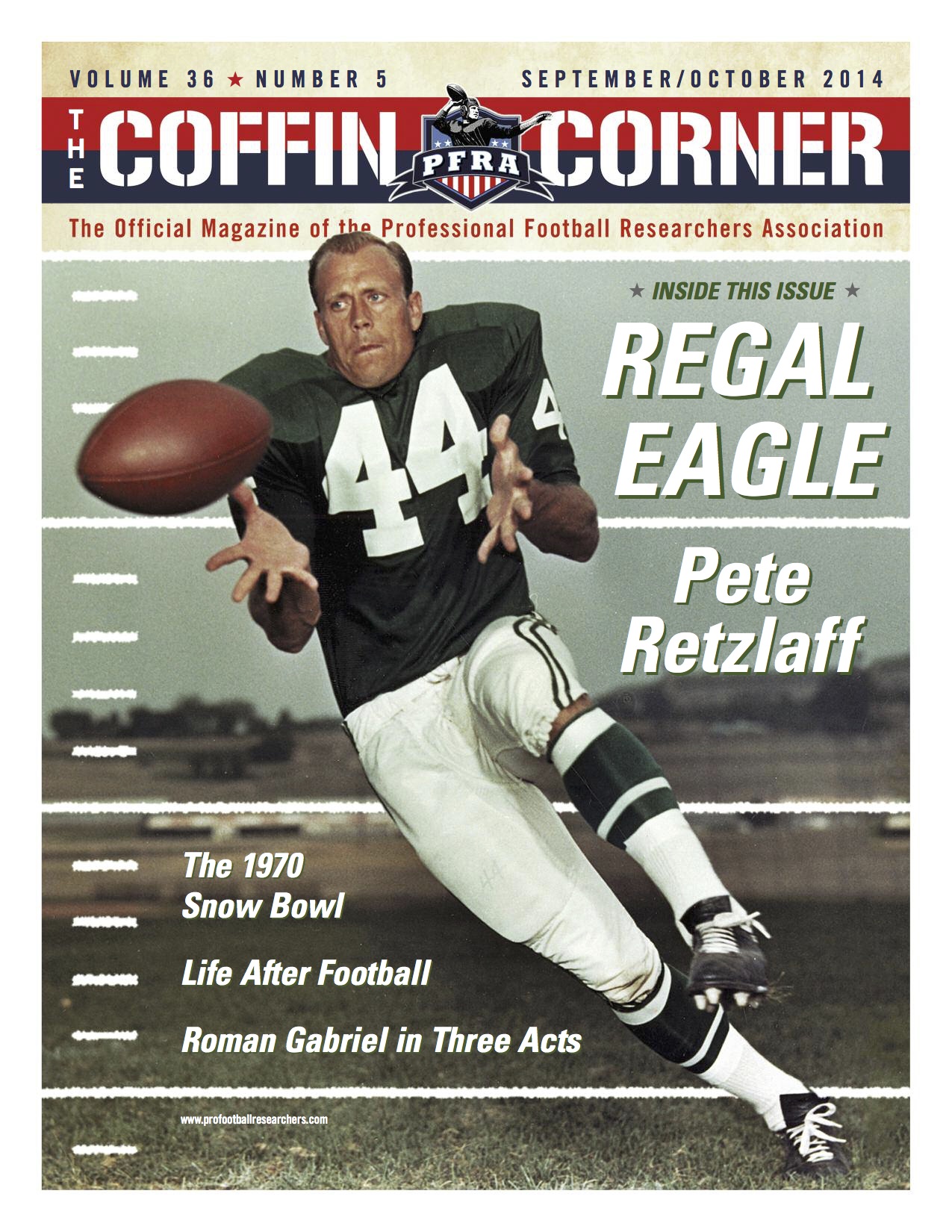 PFRA-ternizing. A notice on the permanent change to the Coffin Corners masthead honoring Bob Carroll as the founder of the PFRA and a reminder for renewing memberships for next year.

The 1970 Snow Bowl: The Firebirds Nail Down the ACFL Title by William J. Ryczek. An excerpt from the Ryczeks Connecticut Gridiron: Football Minor Leaguers of the 1960s and 1970s recounting the Atlantic Coast Football League championship game between the Pennsylvania Firebirds and the Hartford Knights and the wintry conditions the players and fans faced.

The Baron of Philadelphia: Eagles Receiving Great Pete Retzlaff by Bert Gambini. A history of the football career of Pete Retzlaff, who played multiple positions for the Eagles from 1956 to 1966 and wound up being one of the first of a new breed of modern tight ends in the NFL.

After Football for Kevin Fagan by Richard Burton. A look at the post-NFL career of former San Francisco 49ers defensive end Kevin Fagan, who is now the head womens softball coach at the College of Central Florida.

Roman Gabriel: A Career in Three Acts by John Turney. A detailed recounting of the three distinct parts to the NFL career of quarterback Roman Gabriel, elected to the PFRAs Hall of Very Good in the Class of 2013. 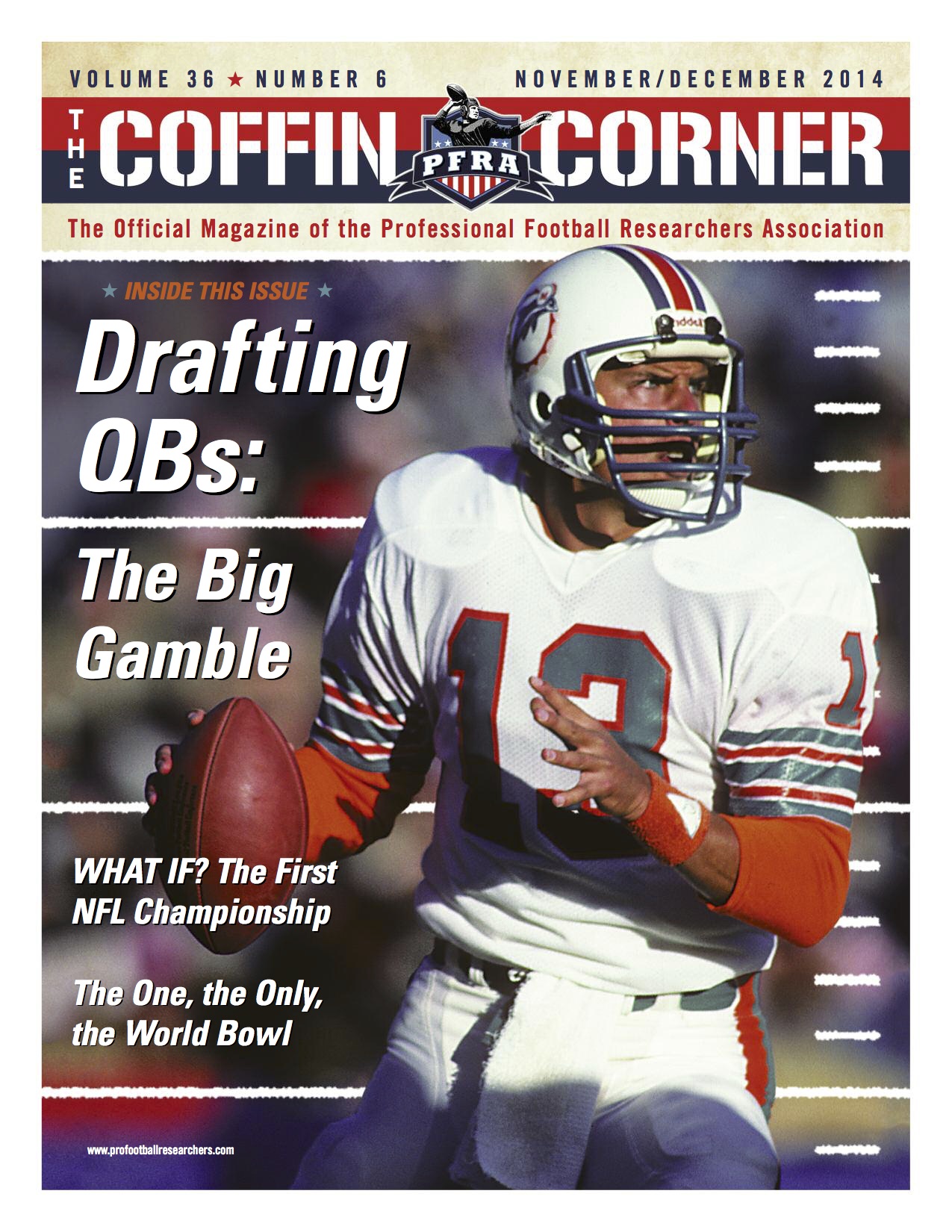 PFRA-ternizing. A special message from the PFRAs president on the results from the December 5 board of directors meeting and, from the vice-president, and an update on our membership numbers, including a map showing the PFRA's presence in 36 states and Canada.

It's a Gamble: Drafting Quarterbacks in Round One by Jared Kraus. From Terry Bradshaw to Teddy Bridgewater, a 45-year look at the risks inherent with picking pass throwers in the first round of the NFL Draft and the hidden gems such as Tom Brady found in later rounds.

The First NFL Championship: Portsmouth vs. Brooklyn? by Joshua M. Anderson. The final standings for 1933 don't tell the full story of the first title game. With three weeks left to play in the regular season, the Spartans (at .750) and Dodgers (at .800) both led their divisions, ahead of the Bears (.714) and the Giants (.700), respectively. The streaks that followed made all the difference and made NFL history.

World Bowl I... and Only by Mark Speck. (Coffin Corner Classic). The first in a new series of articles looking back at Coffin Corner history, where a relevant article from the publications last century gets a new look for this century. In this case, its the story of the one and only championship game for the World Football League, played 40 years ago in Birmingham, Alabama.