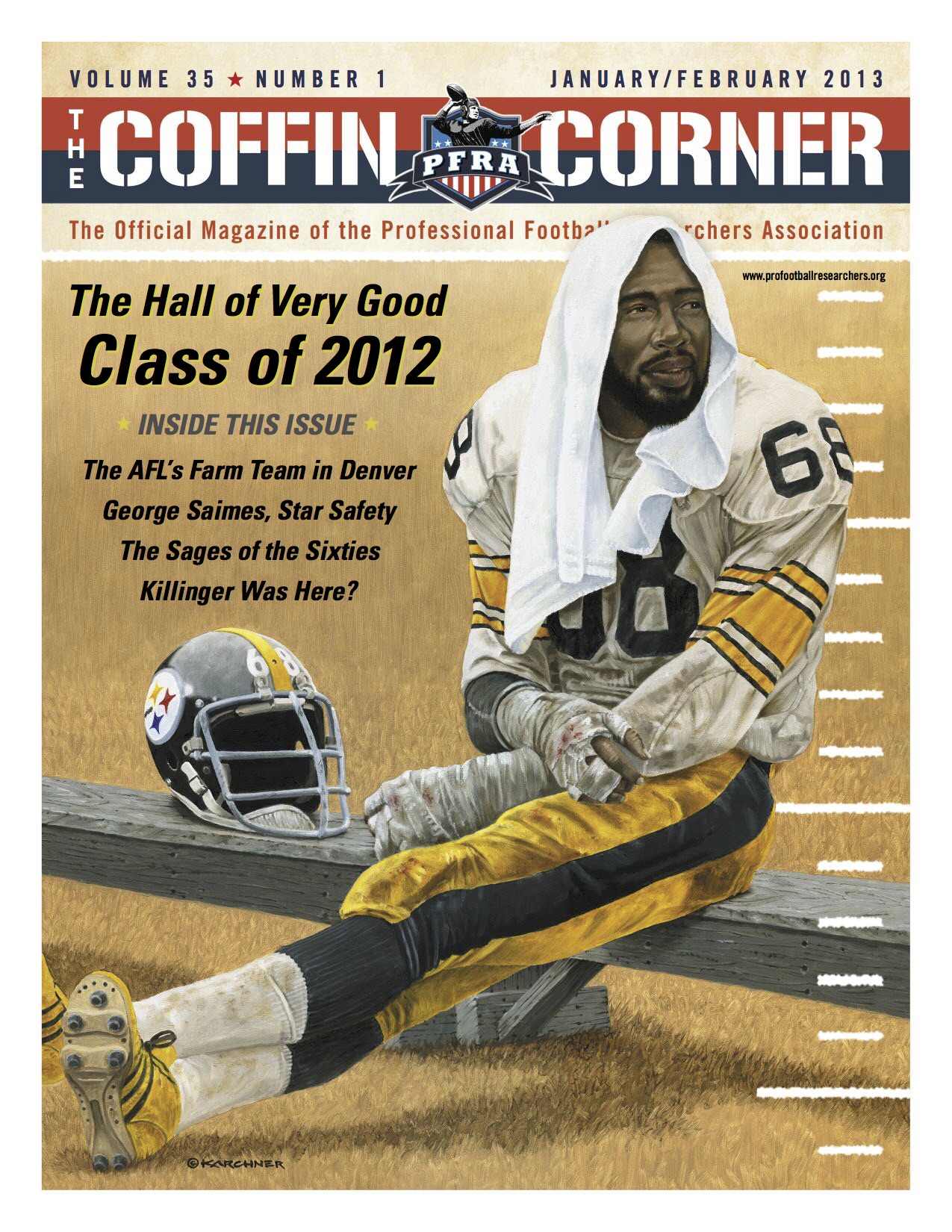 The State of the PFRA by Ken Crippen. An annual report from the executive director on the PFRA's present status and future goals.

The 2011 PFRA Award Winners. An announcement of the winners of the Ralph Hay, Nelson Ross and Bob Carroll Memorial Writing Awards for 2011.

The AFL's Farm Team in Denver by Mark Speck. A humorous history of the Denver Broncos of the 1960s and the stable of quality players they supplied to other AFL teams.

George Saimes, Star Safety by Greg Tranter. A look back at the Buffalo Bills defender, arguably one of the best safeties in the history of the AFL.

Sages of the Sixties by Tracy Thibeau. An analytical article that reviews the predictions of the major preseason pro football publications of the 1960s and charts their success (or lack thereof).

Killinger Was Here? by Michael D. Benter. The curious case of former college star Glen Killinger and the 1924 incident where he was promoted to appear and to have allegedly have played in an NFL game, only to have never even been in the league that year. 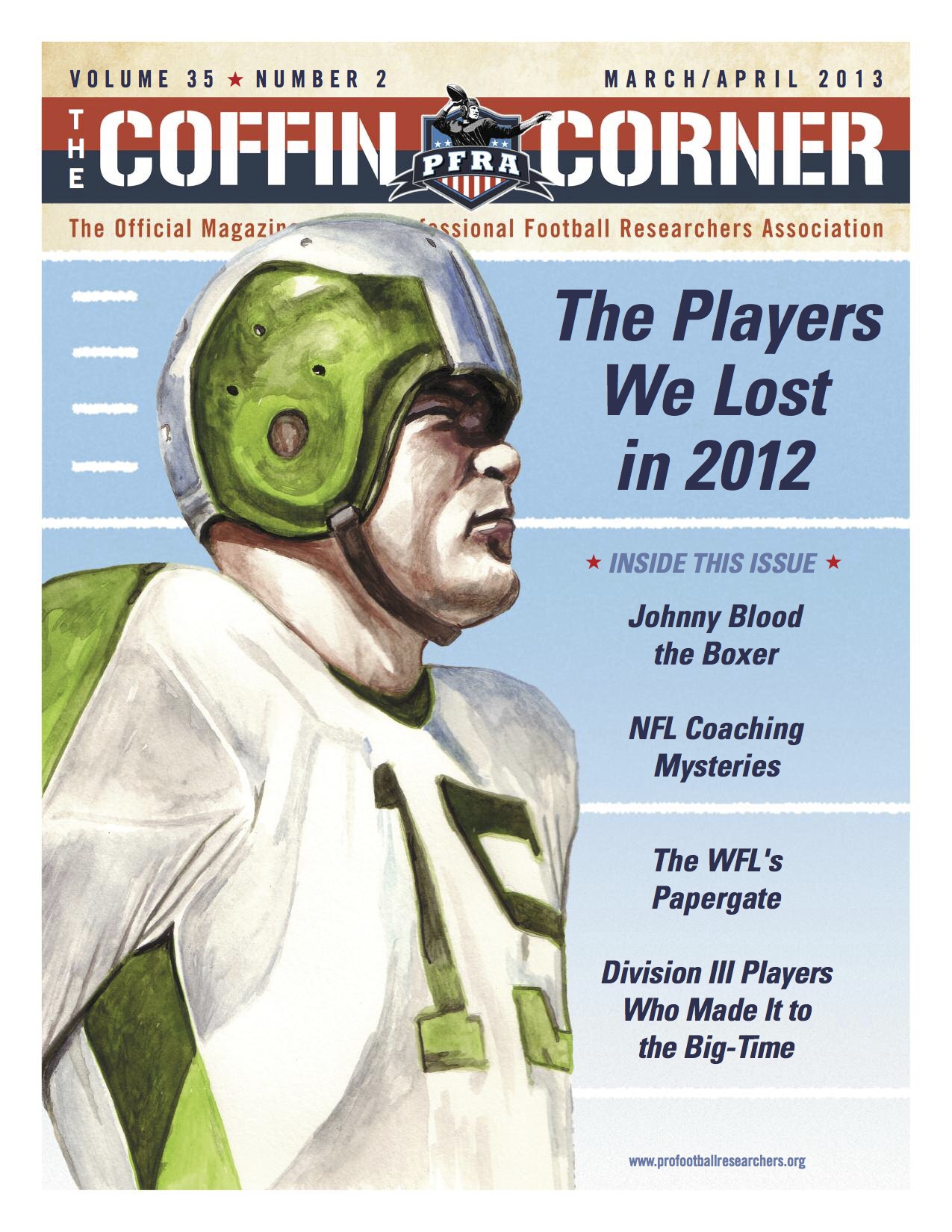 Johnny Blood the Boxer by Ralph Hickok. The story of the brief boxing career of the unpredictable John Victor "Blood" McNally, based on interviews conducted with McNally and his trainer by the author in 1973.

Five Open Questions in NFL Coaching History by John Maxymuk. Five coaching cases from the early days of the NFL featuring short-tenured player-coaches, siblings with similar (or the same) names, and teams that lasted only a few games.

Papergate and the Demise of the WFL by Denis M. Crawford. A ticket and tax scandal dubbed "Papergate" that hurt the credibility of the new World Football League and led to the resignation of a team president on the same day President Nixon announced he was leaving office.

Longshots: Division III Players in the NFL by Doug Bigelow. Based on first-person interviews by the author, these are inspiring and unlikely stories of small-college players who beat the longest of odds and made it to the highest level of professional football.

2012 Player Deaths. A list of the pro football players who died last year, including information on the team(s) they played for, the date and location of their death (if known) and their age when they passed away. 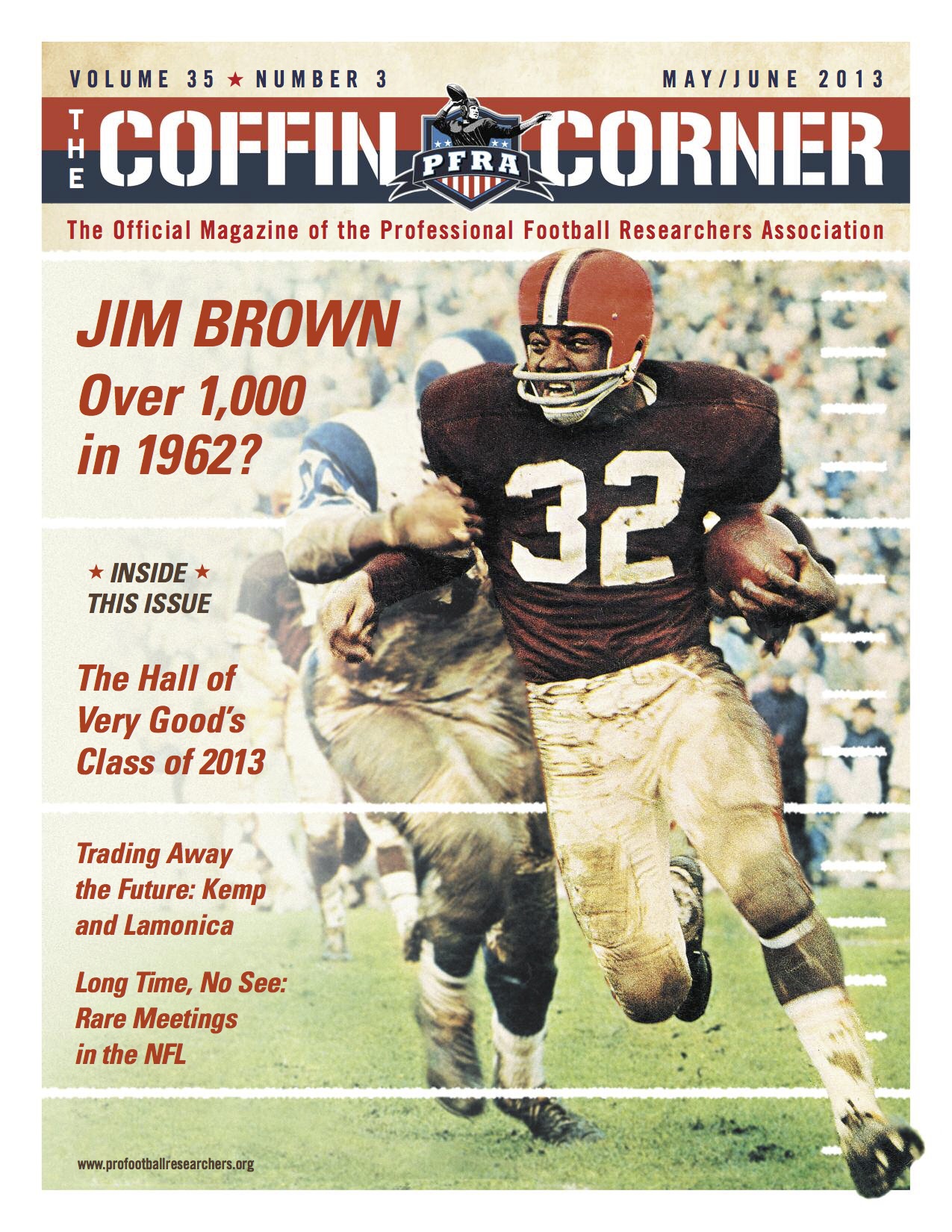 PFRA-ternizing. An apology (of sorts) from the editor on the lateness of the current issue.

The Hall of Very Good Class of 2013. Mini-biographies of the nine members of the Class of 2013 and a list of past enshrinees back to the inaugural class.

Rushing to Judgment: Recovering Jim Browns Lost Yardage in 1962 by Brian Marshall. The argument is made that Jim Brown in fact broke the 1,000-yard barrier in 1962 after evidence is presented from play-by-play reports of five disputed games from that season.

Trading Away the Future: Kemp and Lamonica by Bert Gambini. A tale of two teams (the Bills and the Raiders) and the reversal of fortune they experienced after Buffalo held on to Jack Kemp and traded Daryle Lamonica to Oakland in the waning days of the AFL.

Long Time, No See: Rare Meetings in the NFL by Ivan Urena. An analysis of the different scheduling formulas used by the NFL before realignment in 2002, that led to such quirks as teams from the same conference going nearly a generation without meeting on the field. 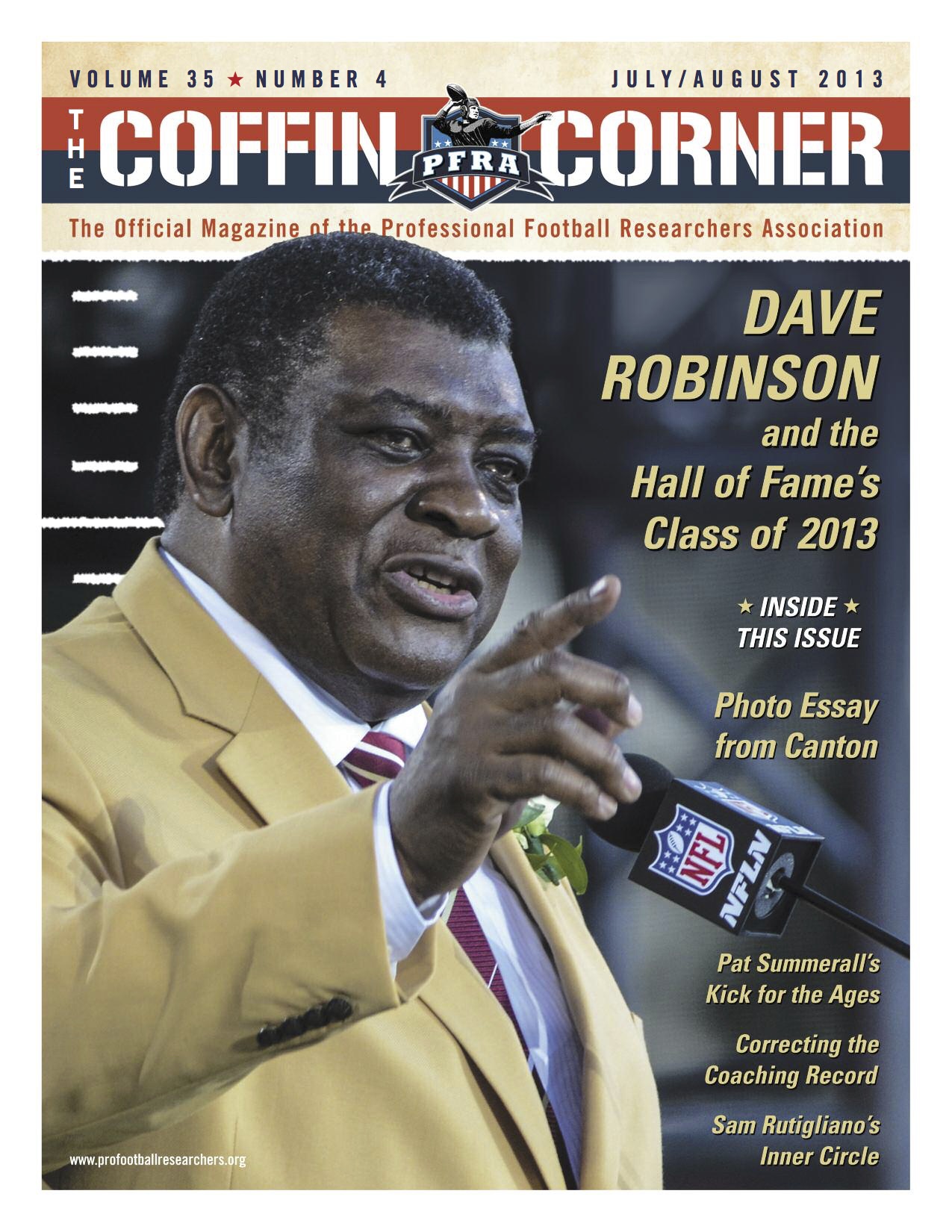 2013 Pro Football Hall of Fame Enshrinement Festival: A Photo Essay by Mark Palczewski. Photographs from the Hall of Fame weekend in Canton by the newly-named official photographer of the PFRA.

PFRA-ternizing. An announcement on the formation of local chapters of the national PFRA and an official ballot for the four elective offices of the group. (NOTE: Deadline for voting is October 31, 2013.)

The Class of 2013 by the Pro Football Hall of Fame. Highlights, statistics and awards from the football careers of the seven members in this years Hall of Fame class.

A Kick for the Ages by Ed Gruver. A look back at Pat Summerall's game-winning field goal against the Cleveland Browns in a blinding snowstorm on the last day of the 1958 regular seasona victory that would ultimately propel the New York Giants on to the "The Greatest Game Ever Played."

Correcting the Coaching Record by John Maxymuk. An attempt to set the record straight in six standard references from both print and online sources on head coaching omissions and the misallocations of wins and losses in the early NFL and AAFC.

The Inner Circle by Roger Gordon. The story of head coach Sam Rutigliano and the substance abuse support group he created to combat drug and alcohol addiction among players in the early 1980s. Though the program no longer exists within the Browns organization, the effort lives on in Coach Sam's Inner Circle Foundation, a non-profit that works with disadvantaged children in inner-city Cleveland. 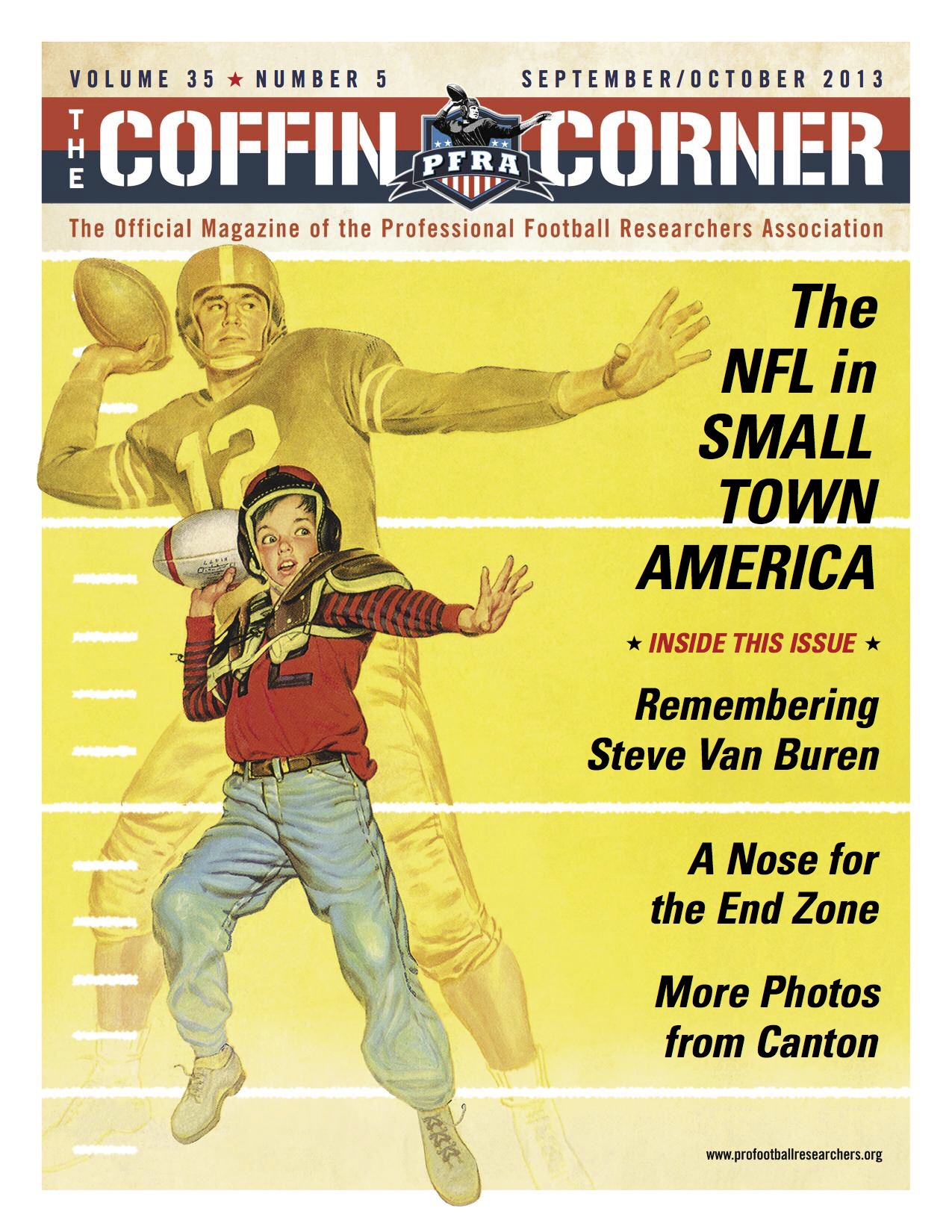 PFRA-ternizing. An announcement on the resignation of Ken Crippen as executive director, an update on the 2014 PFRA meeting hosted by the Cleveland Browns and a survey asking members to rate The Coffin Corner and suggestions for its improvement.

The Noblest Eagle: Remembering Steve Van Buren by George Bozeka. A football biography and eulogy for one of the greatest Philadelphia Eagles players of all time, who passed away in August of 2012.

Big-Time Football in Small Town America by Andrew McKillop. An engaging look at the some of the geographic (and demographic) oddities associated with small town teams of the early league and the some of the smaller municipalities that have hosted NFL games.

A Nose for the End Zone: Indexing the Game's Most Efficient Scorers by Michael Peters. An analysis of NFL players who scored touchdowns at rates that far outstripped rate of "touches" or ball-handling opportunities.

2013 Pro Football Hall of Fame Enshrinement Festival: Photo Essay, Part 2 by Mark Palczewski. Photographs from the Hall of Fame weekend in Canton by the official photographer of the PFRA. 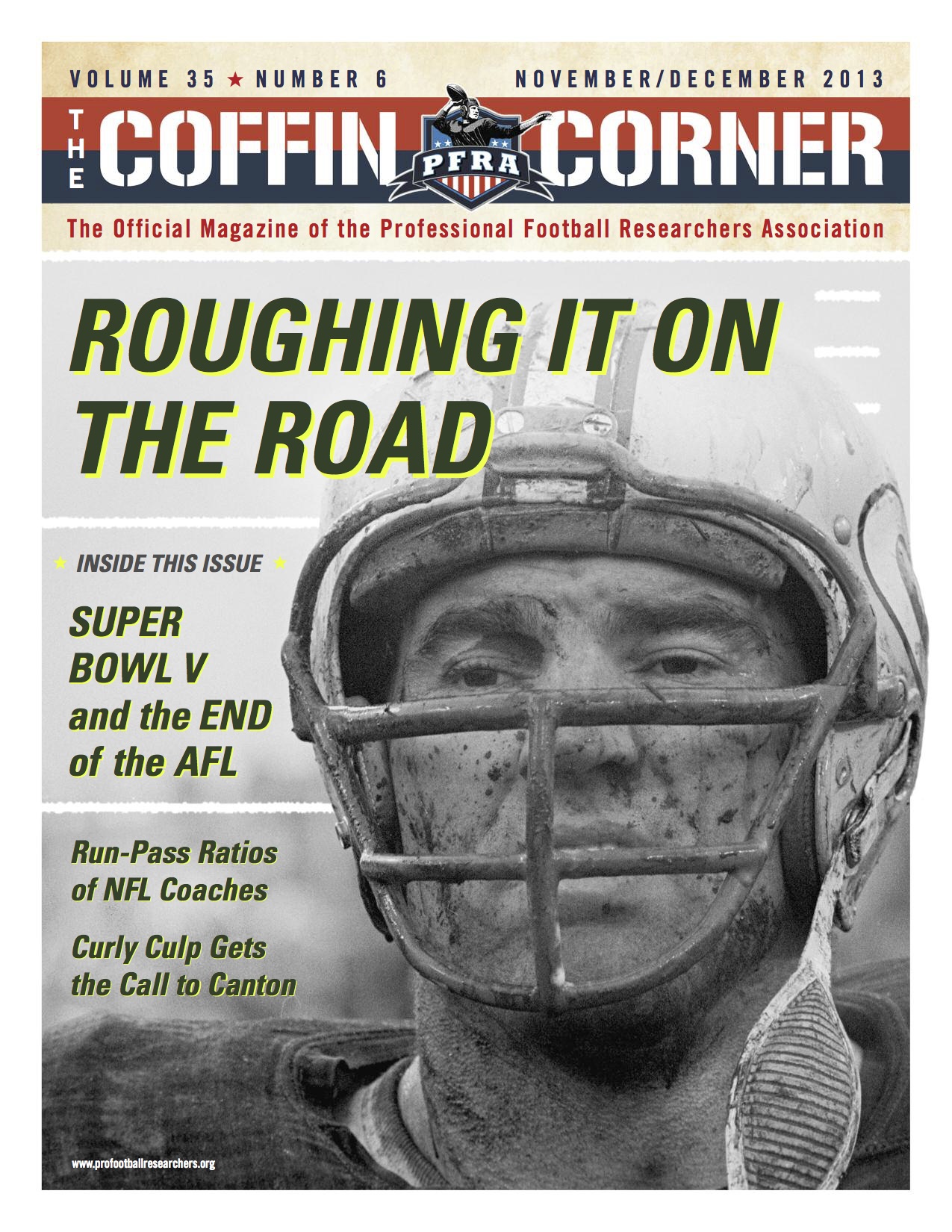 PFRA-ternizing. The results of the 2013 PFRA elections, the resignation of president Tod Maher, an announcement on the formation of the Education Committee and the 2012 PFRA award winners.

Super Bowl V and the End of the AFL by Bert Gambini. An argument for Super Bowl V, which pitted the Baltimore Colts against the Dallas Cowboys, serving as the unofficial end of the American Football League after its merger with the NFL.

Fill the Air or Pound the Ground: The Run-Pass Ratios of Head Coaches by John Maxymuk. A comparison and analysis of the run/pass ratios of head coaches and league averages from the NFL (81 seasons), AFL (10 seasons) and AAFC (four seasons).

Culp-Ability: Curly Culp Gets the Call from Canton by Ed Gruver. A remembrance of the stellar football career of defensive lineman Curley Culp, voted into the Pro Football Hall of Fame's class of 2012.

Roughing It on the Road: Bad Weather Games from Lambeau by Michael D. Benter. A description of five memorable games played by the Green Bay Packers in which the inclement weather was the story -- and they weren't at Lambeau Field.