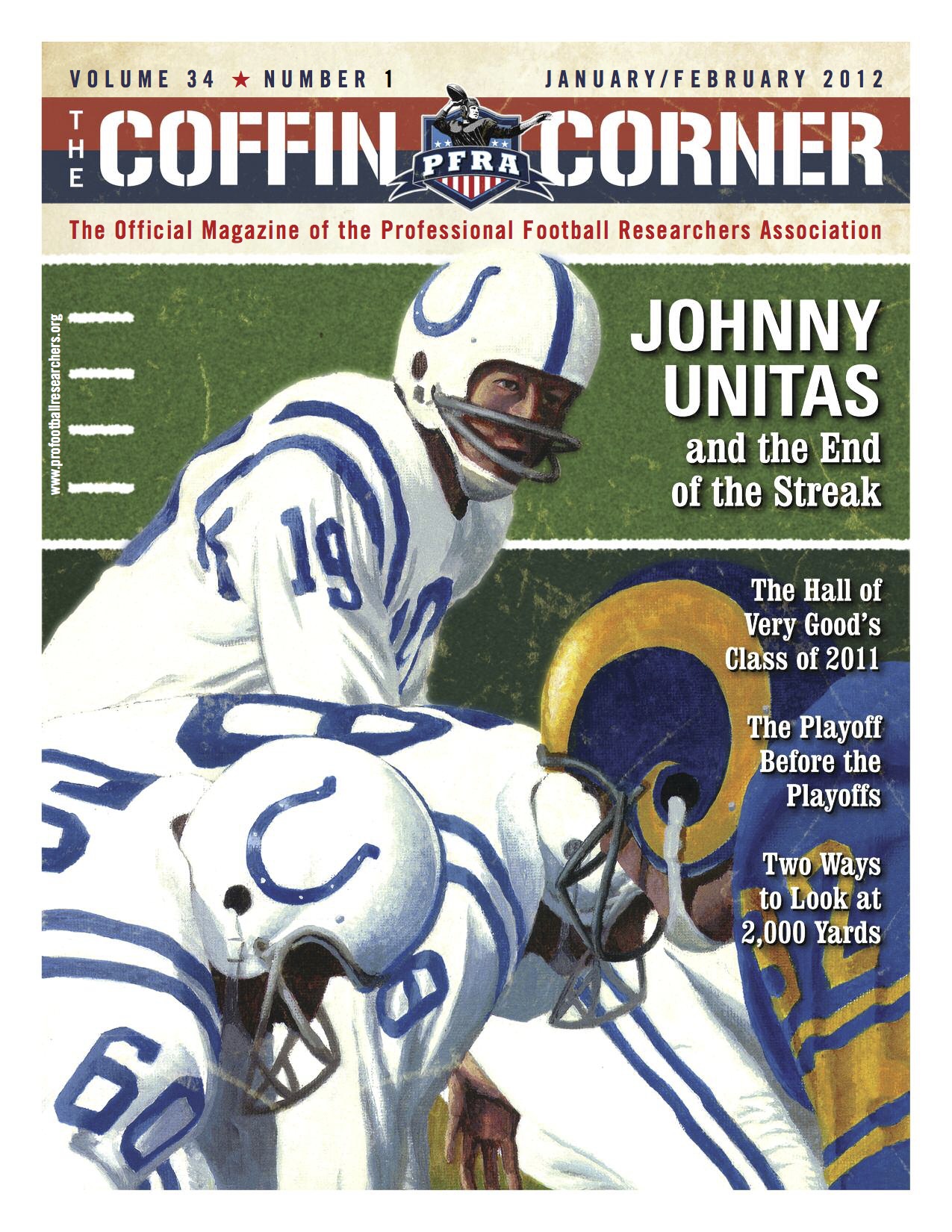 The State of the PFRA by Ken Crippen. An annual report from the executive director on the PFRA's present status and future goals.

Johnny Unitas' 47-Game Touchdown Streak by Chris Willis. A look back at one of the most remarkable streaks in sports history and the unlikely team that stopped it.

Winner Take All by Mark L. Ford. A discussion of final regular season games between two teams with a single playoff spot on the line.

2,000 Combined Yards by Brian Marshall. A review of the players who have broken the 2,000-yard barrier in rushing and receiving yards.

2,000 Net Yards by Ken Pullis. A short introduction and statistical list of all the players (AAFC/AFL/NFL) who have gained more than 2,000 all-purpose yards. 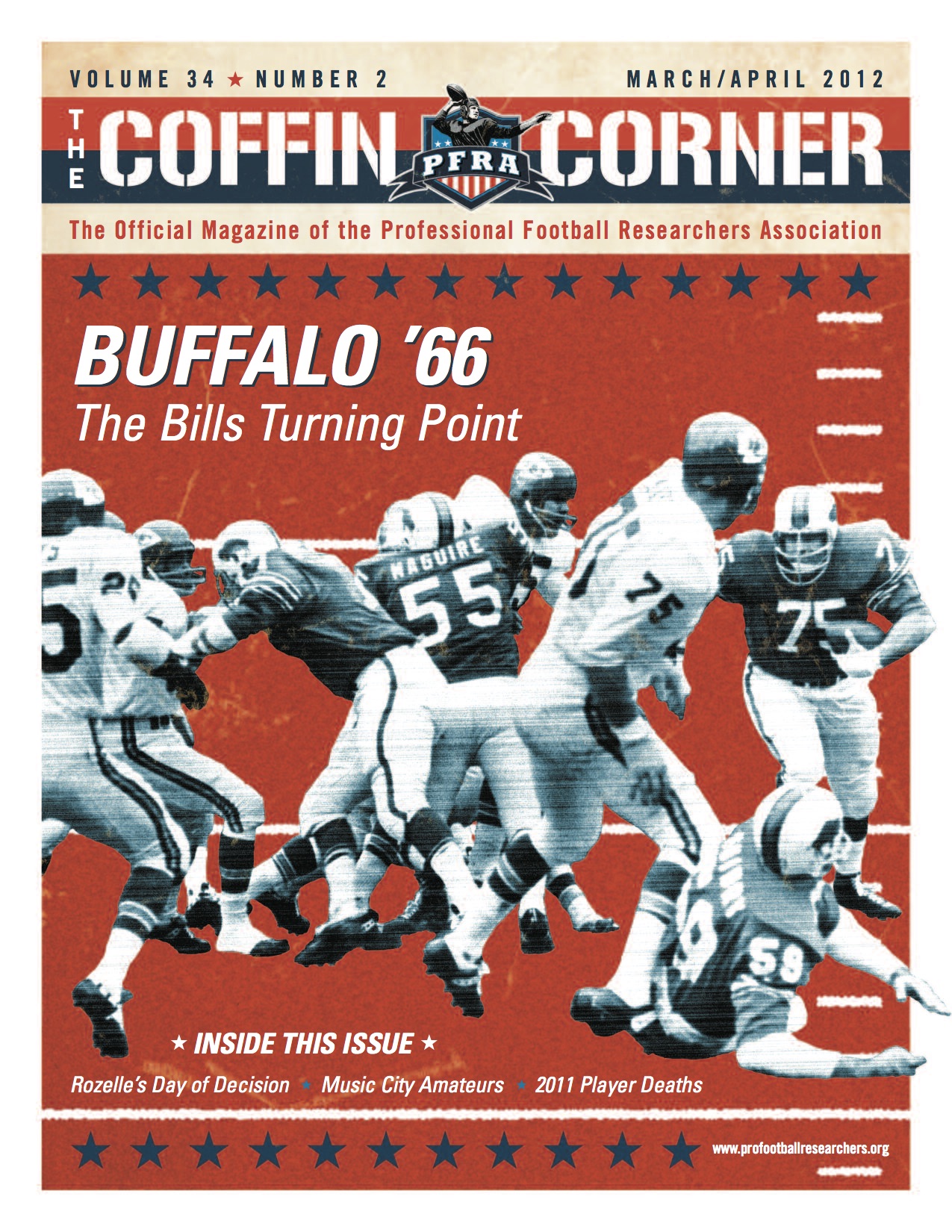 Turning Points by Bert Gambini. An amusing account of the 1966 AFL Championship between the Kansas City Chiefs and the Buffalo Bills, a game which marked a downturn in the fortune of the Bills franchise in the leagues final years.

Pete Rozelle and the Kennedy Assassination by George Bozeka. An examination of the NFL commissioners controversial decision to play a full slate of games less than 48 hours after the president had been assassinated.

When the Florists Ran Wild by Joseph S. Page. Part one of a three-part series on a football team in Nashville, sponsored by a local florist, that went on to win the unofficial amateur national championship in 1927.

Wanted: NFL QB for Contender by Lee Elder. The story of ex-Rams quarterbacks of the late 1950s and early 1960s and the success they enjoyed with other teams in the league after leaving Los Angeles.

2011 Player Deaths. A list of the professional football players who died last year including information on the team(s) they played for, the date and location of their death and their age when they passed away. 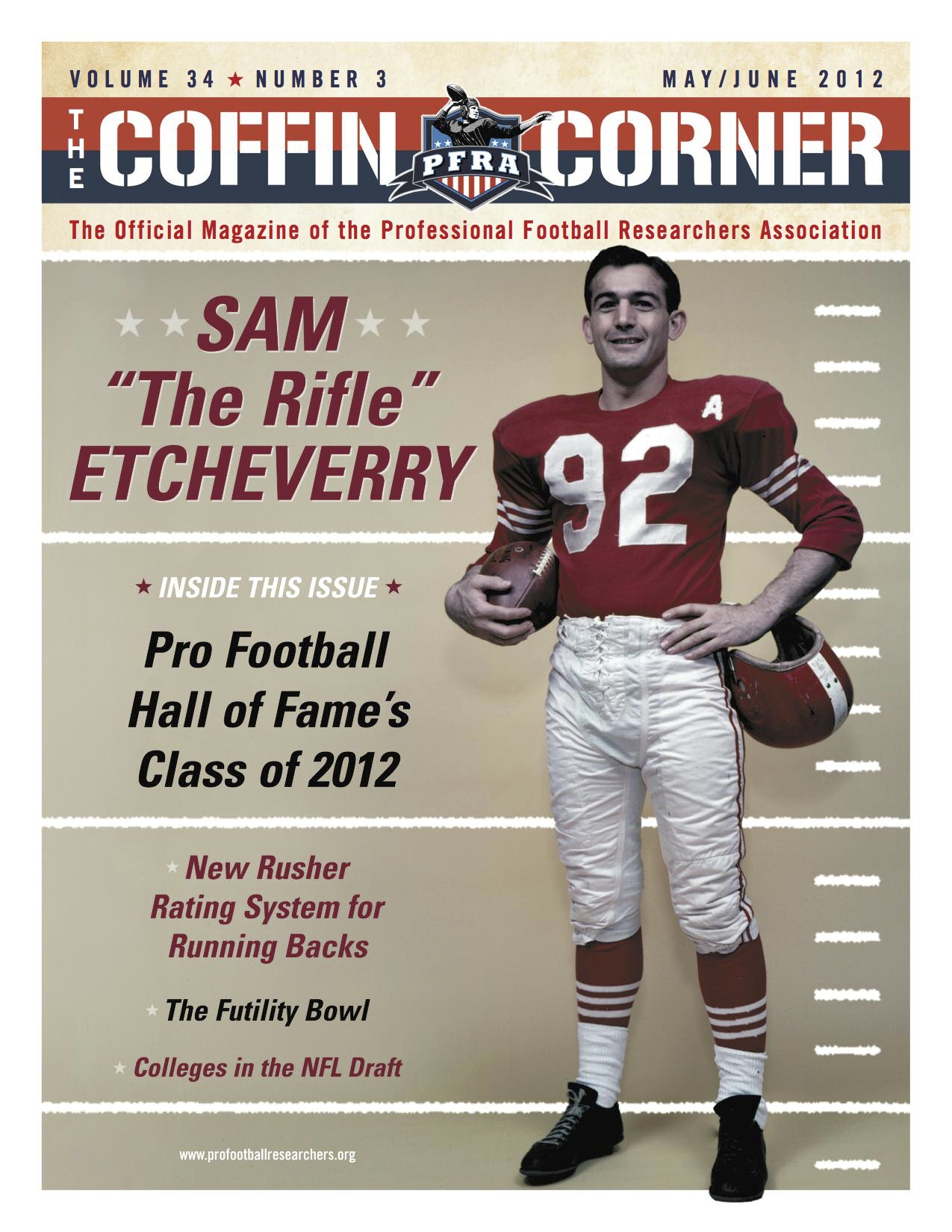 The Class of 2012 by the Pro Football Hall of Fame. Highlights, statistics and awards from the football careers of the six members in this years Hall of Fame class.

Sams Streak by Brian Marshall. An account of Sam Etcheverrys 34-game touchdown pass streak in the CFL from 195456 and a statistical comparison to Unitas streak of 47 games in the NFL.

Rating the Rushers by Ken Crippen. A new system for rating the performance of running backs in the NFL, including methods to normalize the rating for running backs from different eras, rate teams in rushing (both offensively and defensively) and factor in the receiving aspect of the modern running back.

The Futility Bowl by Jay Zahn. A humorous look back at NFL games played between uncommonly bad teams. Winless teams, one-win teams or teams with long losing streaks meet in late-season games...with absolutely nothing on the line, except for a possible top draft pick. Speaking of...

The Chosen Few: Colleges in the NFL Draft. A listing of the top 25 FBS colleges and top five small colleges that have had players selected in the first round of the NFL draft, including players taken during the Common Draft. 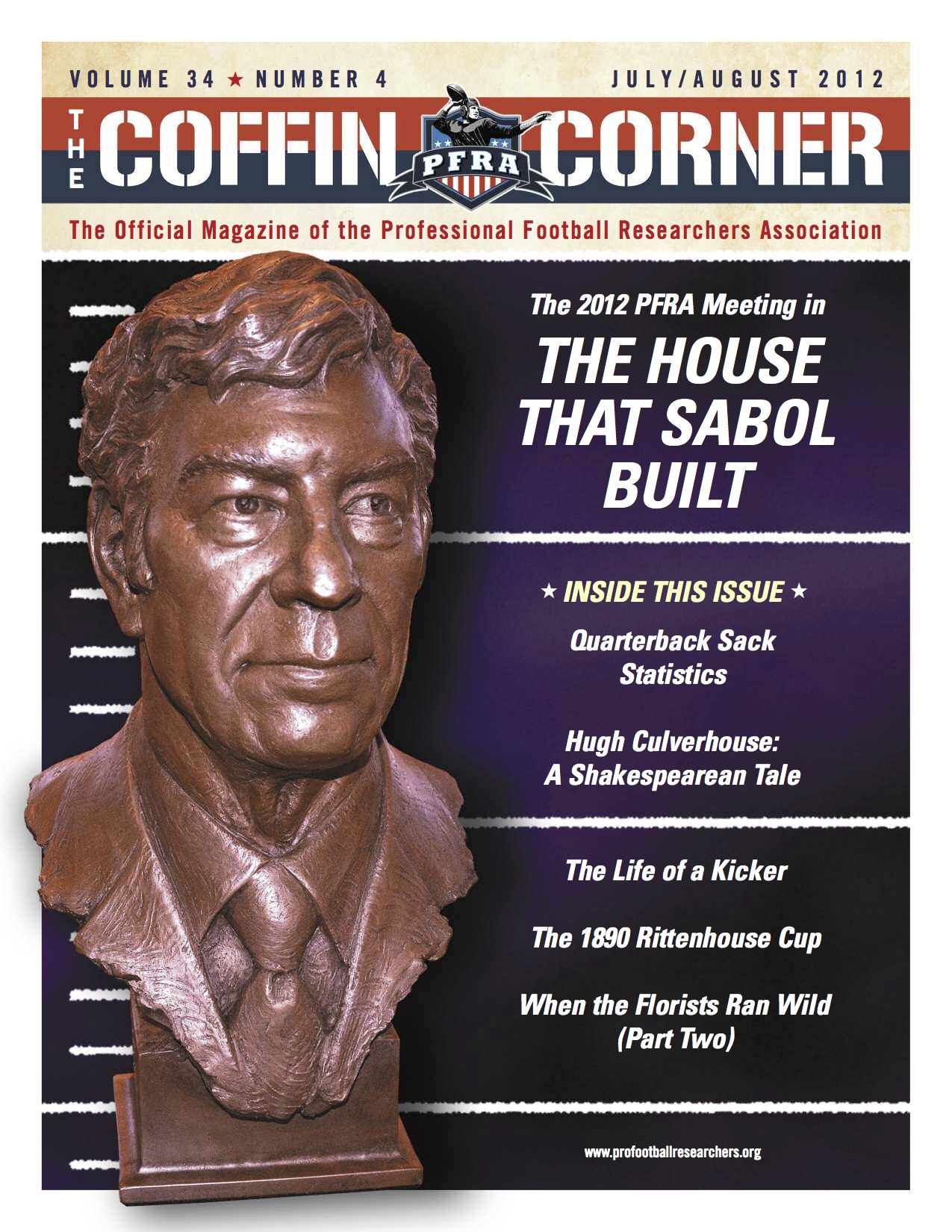 PFRA-ternizing by Ken Crippen. A report from the executive director on the recent PFRA meeting at NFL Films in Mount Laurel, New Jersey, including photographs of the venue and the meeting taken by Mark Palczewski.

Quarterback Sack Statistic s by Pete Palmer. A statistical look at sacks and sack yards against quarterbacks going back to 1947, incorporating new data available from the NFL and including AFL quarterbacks.

Hugh Culverhouse: A Shakespearean Tale by Denis M. Crawford. Adapted from a presentation at the 2012 PFRA meeting, this is a story of greed, power and revenge that is, like the Bard's greatest works, based on an historical figurein this case, the original owner of the Tampa Bay Buccaneers.

The Life of a Kicker by Michael Husted. A former pro's perspective on the missed field goal attempt by Baltimore Ravens kicker Billy Cundiff that ended the 2012 AFC Championship Game and the Ravens hopes of a Super Bowl.

Pro Footballs Missing Link by John M. Spano. The story of an 1890 football game between two gentlemens clubs in Philadelphia and the sterling silver cup they played forpossibly the oldest football trophy of any kind.

When the Florists Ran Wild by Joseph S. Page. Part Two of a three-part series covers a Nashville football team's 1928 season and the unsuccessful defense of its amateur national championship. 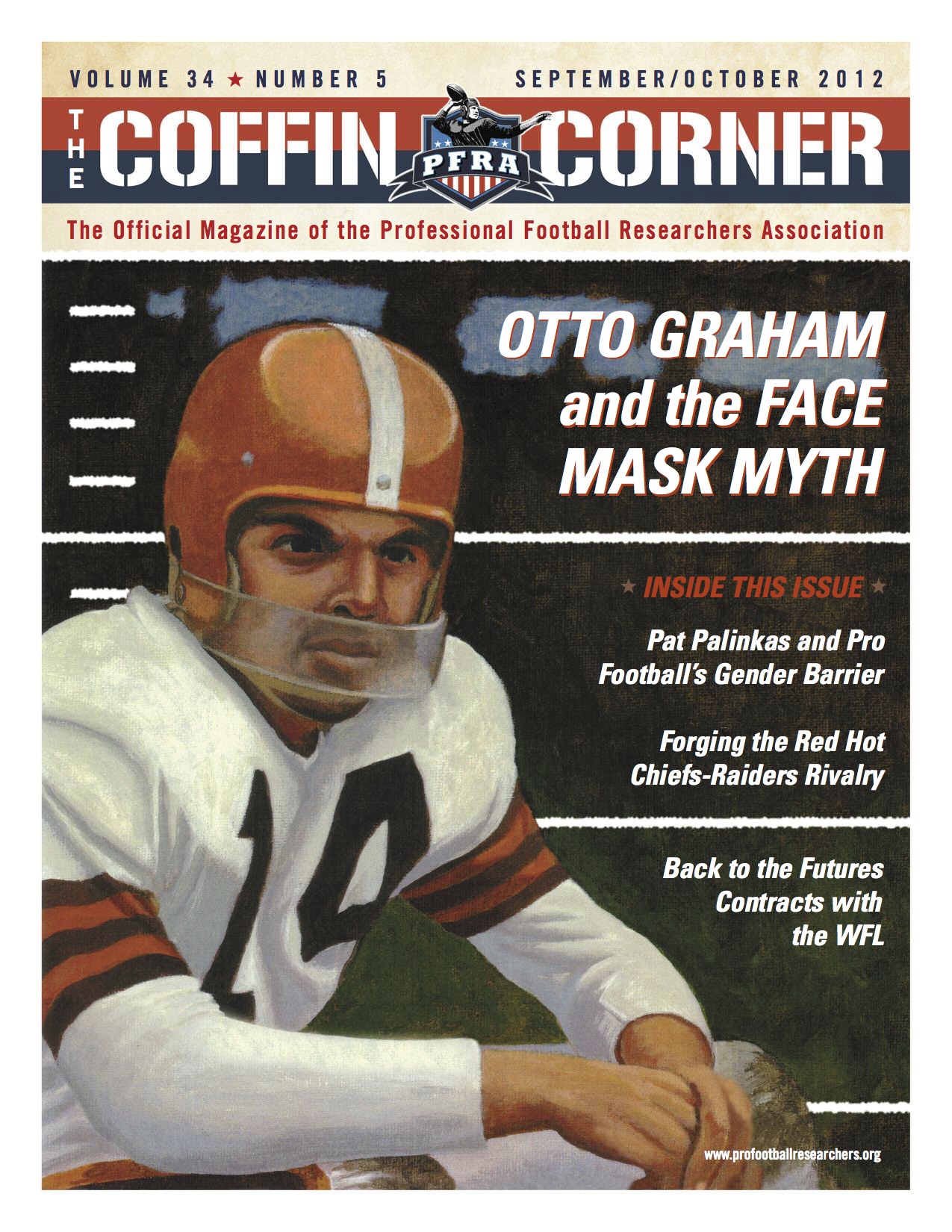 PFRA-ternizing. Words of congratulations on Ken Crippens 2012 Dick Connor Writing Award, an explanation of endnote usage in articles and a brief memorial to Steve Sabol.

The Otto Graham Myth and the Evolution of the Face Mask by Bert Gambini. An historical survey of face masks in the open helmet-era before the famous 1953 incident involving Ottto Graham.

You Ready, Honey? Breaking Pro Footballs Gender Barrier by William J. Ryczek. The Pat Palinkas story, she of the Orlando Panthers and the first woman to play in a professional football game.

Beat the Hell Out of Them The Chiefs-Raiders Rivalry, 1968-71 by Bernard Brinker. A narrative of the games and players involved at the beginning of this fierce football rivalry during the transition from the AFL to the NFL.

Cutting Off Your Nose Tackle to Spite Your Face by Mark Speck. A look back the WFL's practice of signing NFL players to "future contracts", the different teams varying responses to this practice and its contribution to the demise of the WFL. 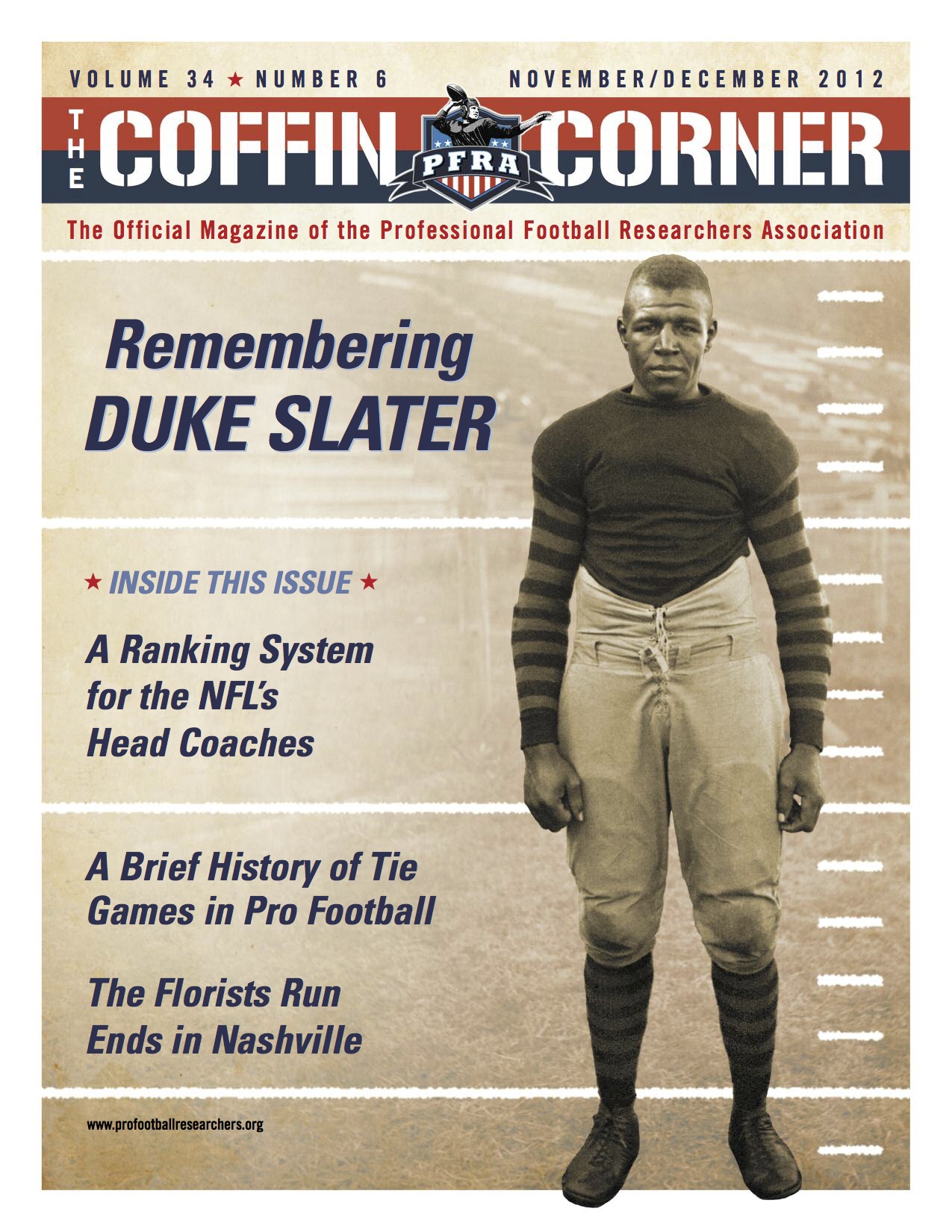 PFRA-ternizing. A year-end membership renewal reminder and updates from the Hall of Very Good and Oral History committees.

Remembering Duke Slater by Neal Rozendaal. A recollection of one of the early greats of the NFL and perhaps the greatest of pro footballs pioneering African American players.

Ranking the NFL Head Coaches by John Maxymuk. A ranking system for head coaches in the championship-era (post-1932) of the NFL, AAFC and AFL, including such factors as both regular season and postseason performance, playoff winning percentage and titles won.

The Ties That Bound by Mark L. Ford. A brief history of tie games in professional football and the what-if scenarios involved. Example games are from the early days of the APFA on up to and beyond 1974, when the overtime period was instituted in the NFL.

When the Florists Ran Wild by Joseph S. Page. The final part of a three-part series on a semi-pro team in Nashville whose season ends abruptly in 1929 after several memorable years in Tennessee.