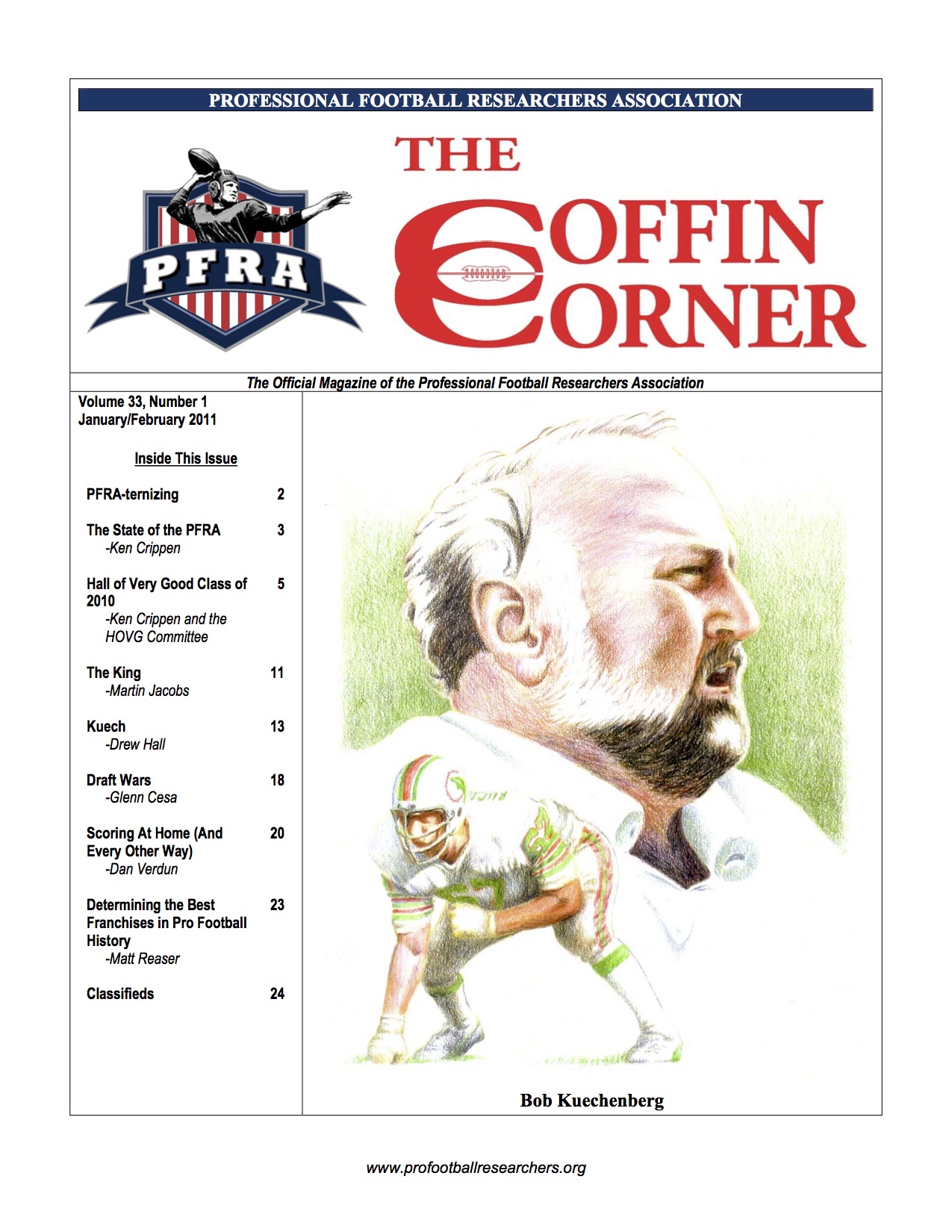 The State of the PFRA by Ken Crippen. A discussion of the PFRA, where it stands and its future.

Draft Wars: The Fight for Players Between the AFL and NFL by Glenn Cesa. A look at the battle for the top college players between the warring leagues.

Scoring at Home (And Every Other Way) by Dan Verdun. Five players have scored touchdowns by rushing, passing, receiving, returning punts and returning kicks. 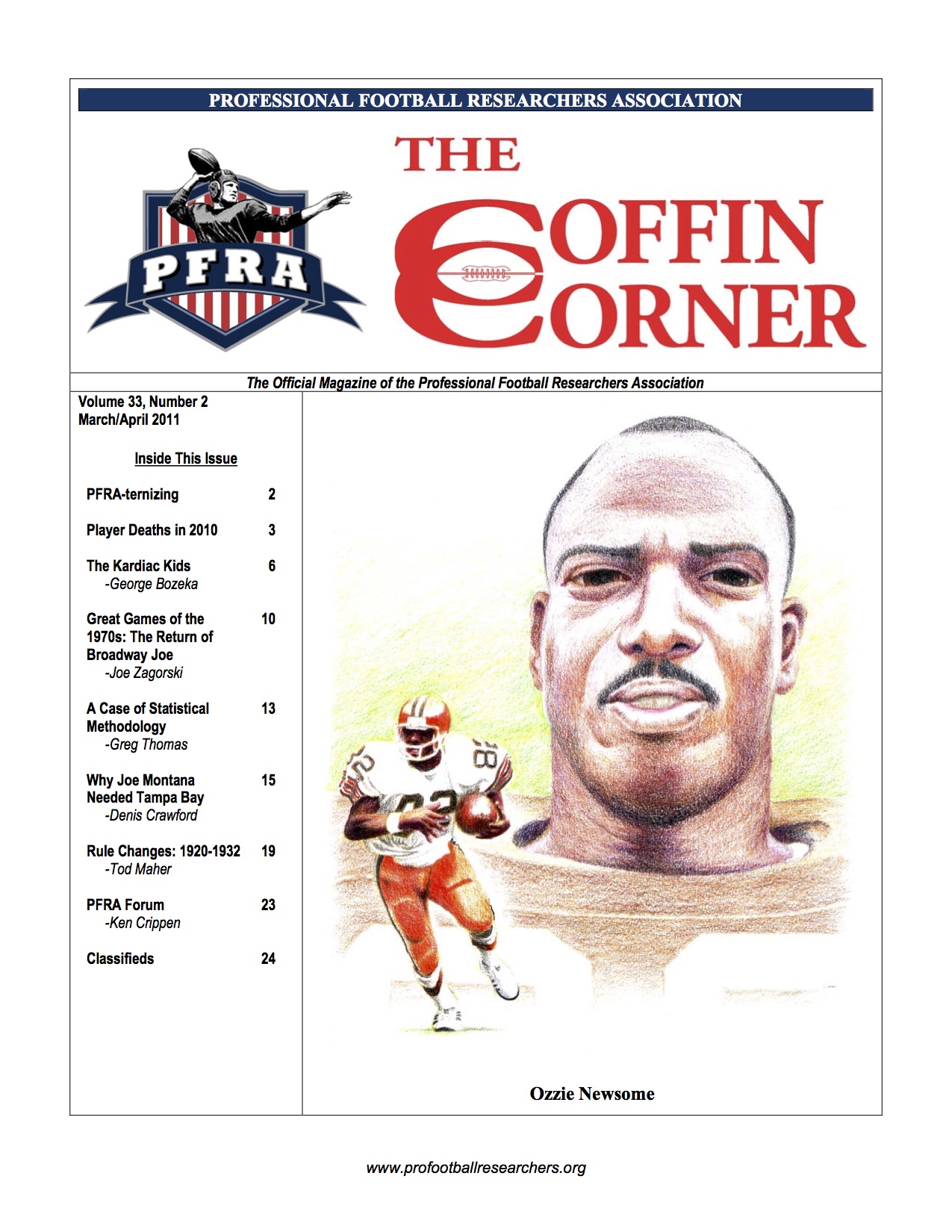 The Kardiac Kids by George Bozeka. A detailed account of the 1980 Cleveland Browns.

Great Games of the 1970s: The Return of Broadway Joe by Joe Zagorski. An account of the November 28, 1971 game between the San Francisco 49ers and the New York Jets.

A Case of Statistical Methodology by Greg Thomas. A look at scrambling quarterbacks and how their rushing statistics are calculated, or mis-calculated. 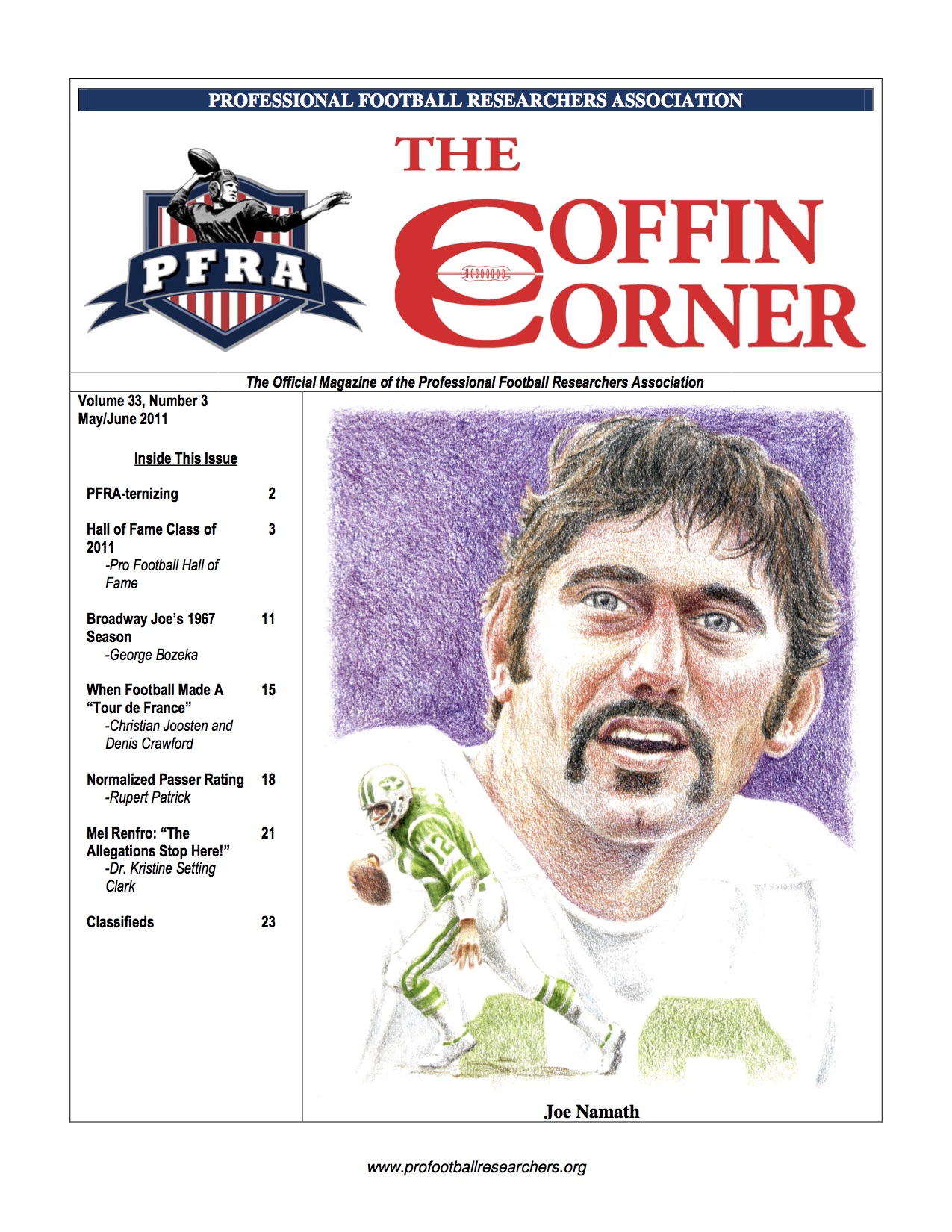 Normalized Passer Rating by Rupert Patrick. The author's attempt to normalize the passer ratings of quarterbacks across eras. 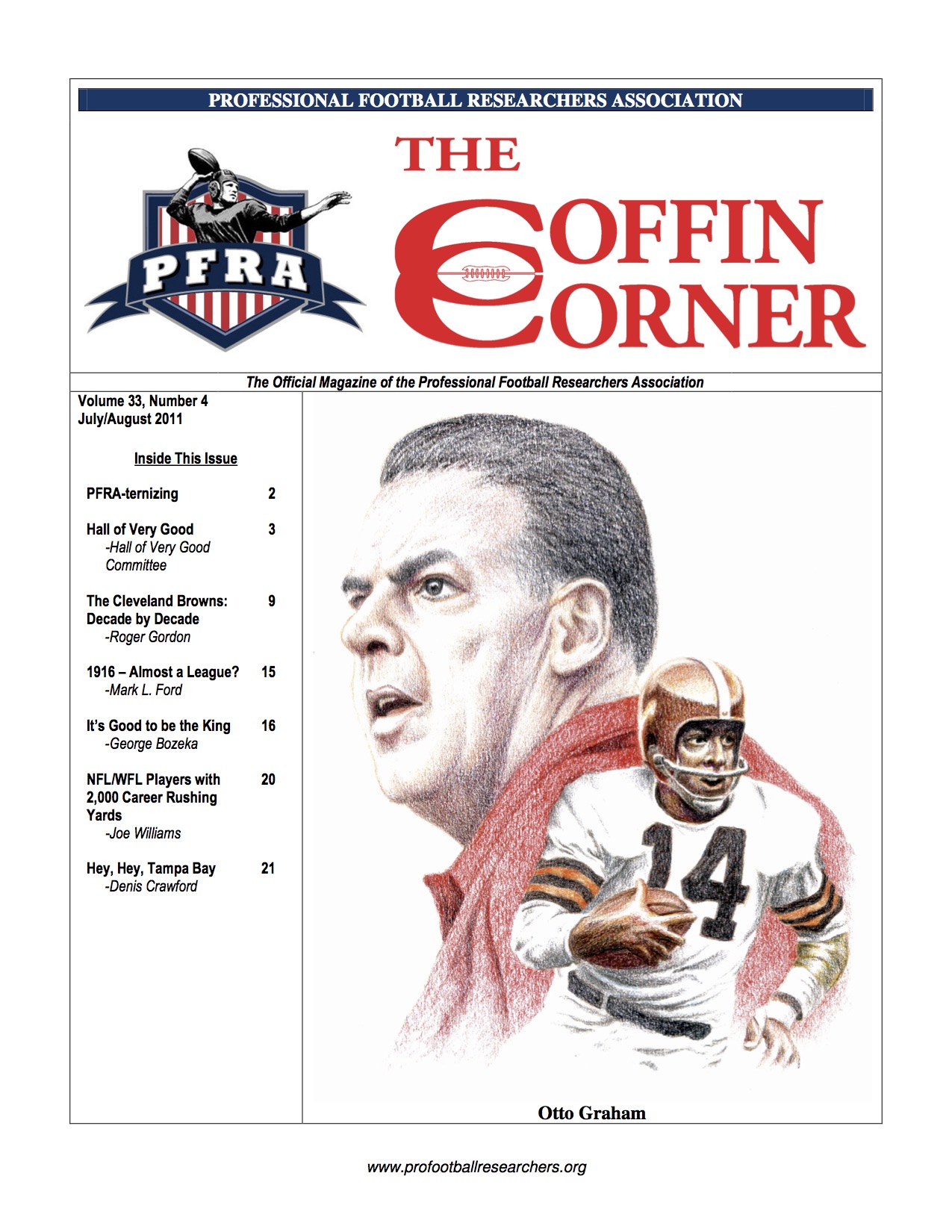 It's Good to be the King by George Bozeka. A biographical article on James Sean Patrick "King" Corcoran.

NFL/WFL Players with 2,000 Career Rushing Yards by Joe Williams. A list of WFL rushers who have had at least 2,000 yards in their career between the NFL and WFL.

Hey, Hey, Tampa Bay by Denis Crawford. The story of the creation of the Buccaneers' song "Hey, Hey Tampa Bay the Bucs Know How to Shine!" 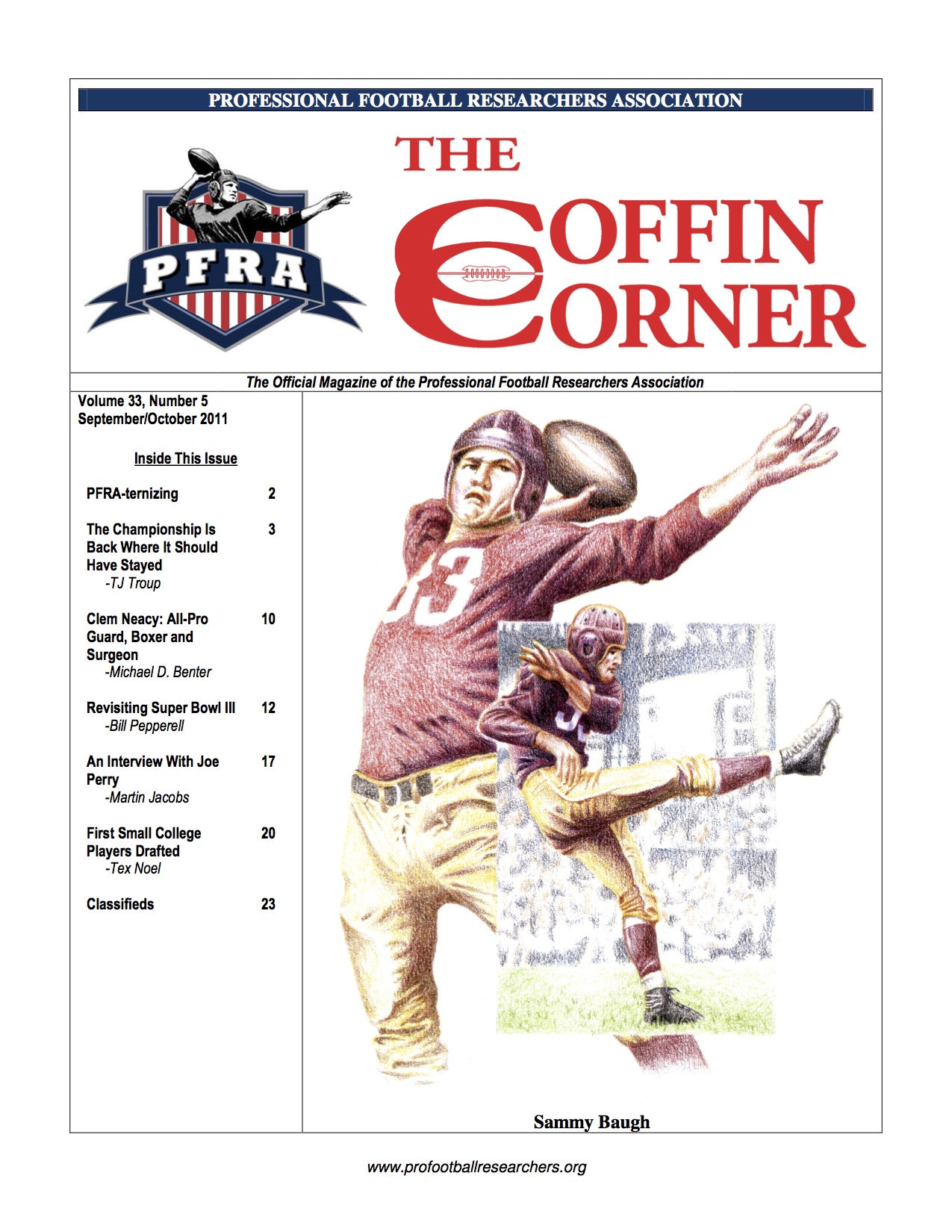 The Championship Is Back Where It Should Have Stayed by TJ Troup. A recap of the 1943 NFL season and the Chicago Bears' run for a third championship in four years.

An Interview With Joe Perry by Martin Jacobs. An interview with San Francisco 49ers Hall of Fame fullback Joe Perry.

First Small College Players Drafted by Tex Noel. A listing of the first small college player drafted each year, including the AFL. 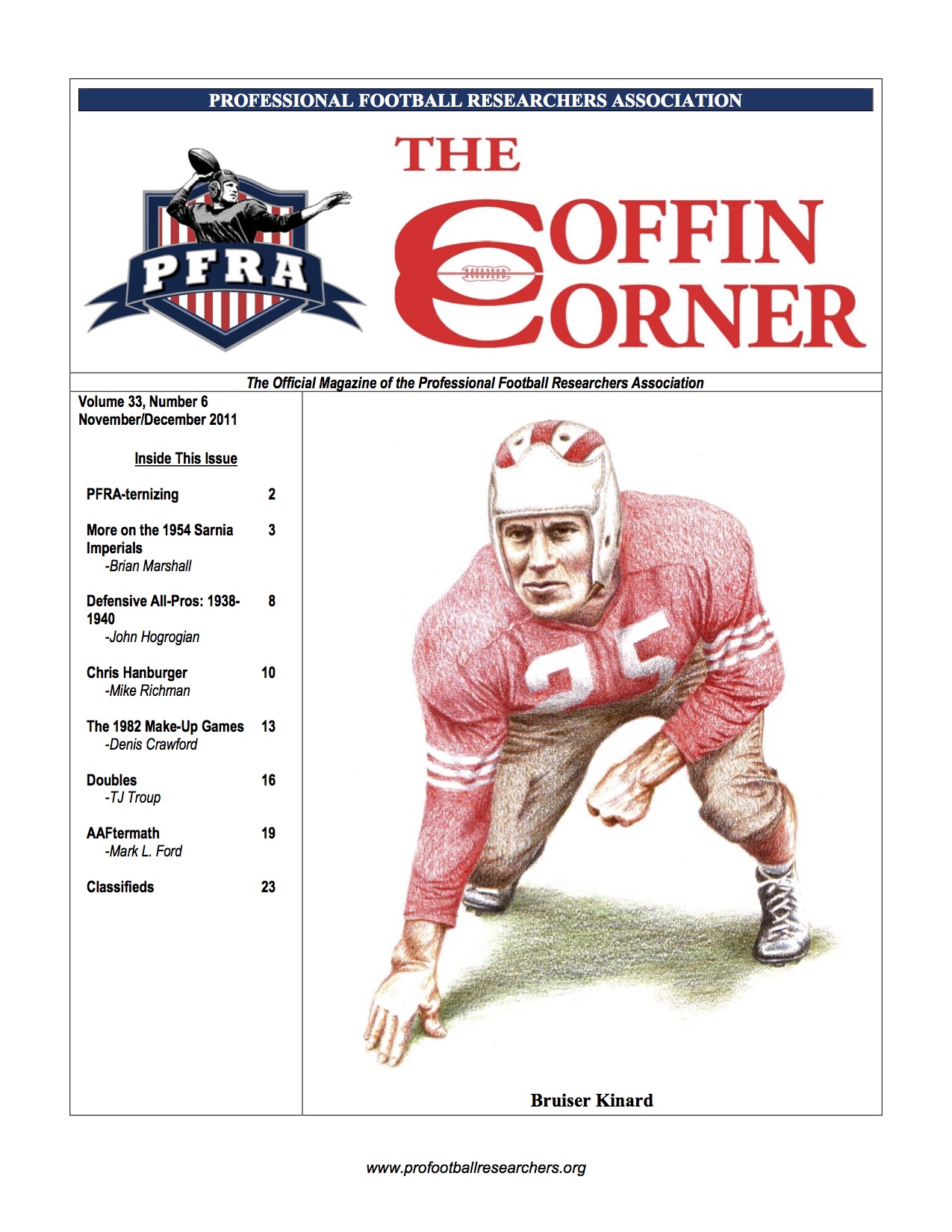 Chris Hanburger by Mike Richman. A biographical article on one of the Pro Football Hall of Fame's most recent inductees.

The 1982 Make-Up Games by Denis Crawford. A look at how the league rescheduled games after the 57-day work stoppage.

Doubles by TJ Troup. A chronological list of all players who have caught a touchdown pass and intercepted a pass in the same game.

AAFtermath by Mark L. Ford. A look at how players dispersed when the All-America Football Conference merged into the National Football League.