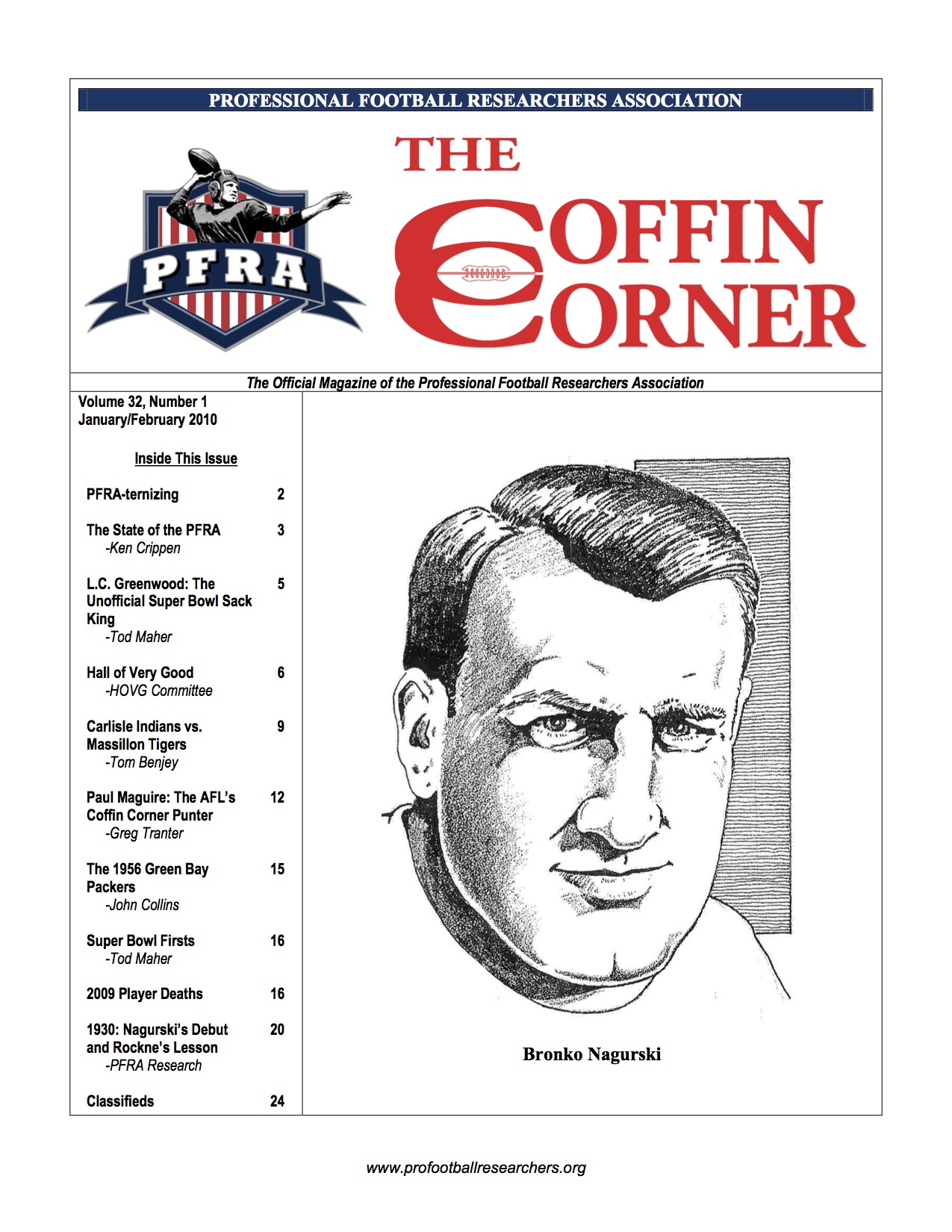 The State of the PFRA by Ken Crippen. A discussion of the PFRA, where it stands and its future.

LC Greenwood: The Unofficial Super Bowl Sack King by Tod Maher. An article on the Pittsburgh Steeler, making the argument that Greenwood has the record for the most sacks in a Super Bowl, even though it is not in the record books.

Hall of Very Good. The announcement of the Class of 2009.

Paul Maguire: The AFL's Coffin Corner Punter by Greg Tranter. A biographical article on the punter/linebacker, who played 11 years in the AFL and NFL.

1930: Nagurski's Debut and Rockne's Lesson by PFRA Research. An in-depth look at the 1930 NFL season. 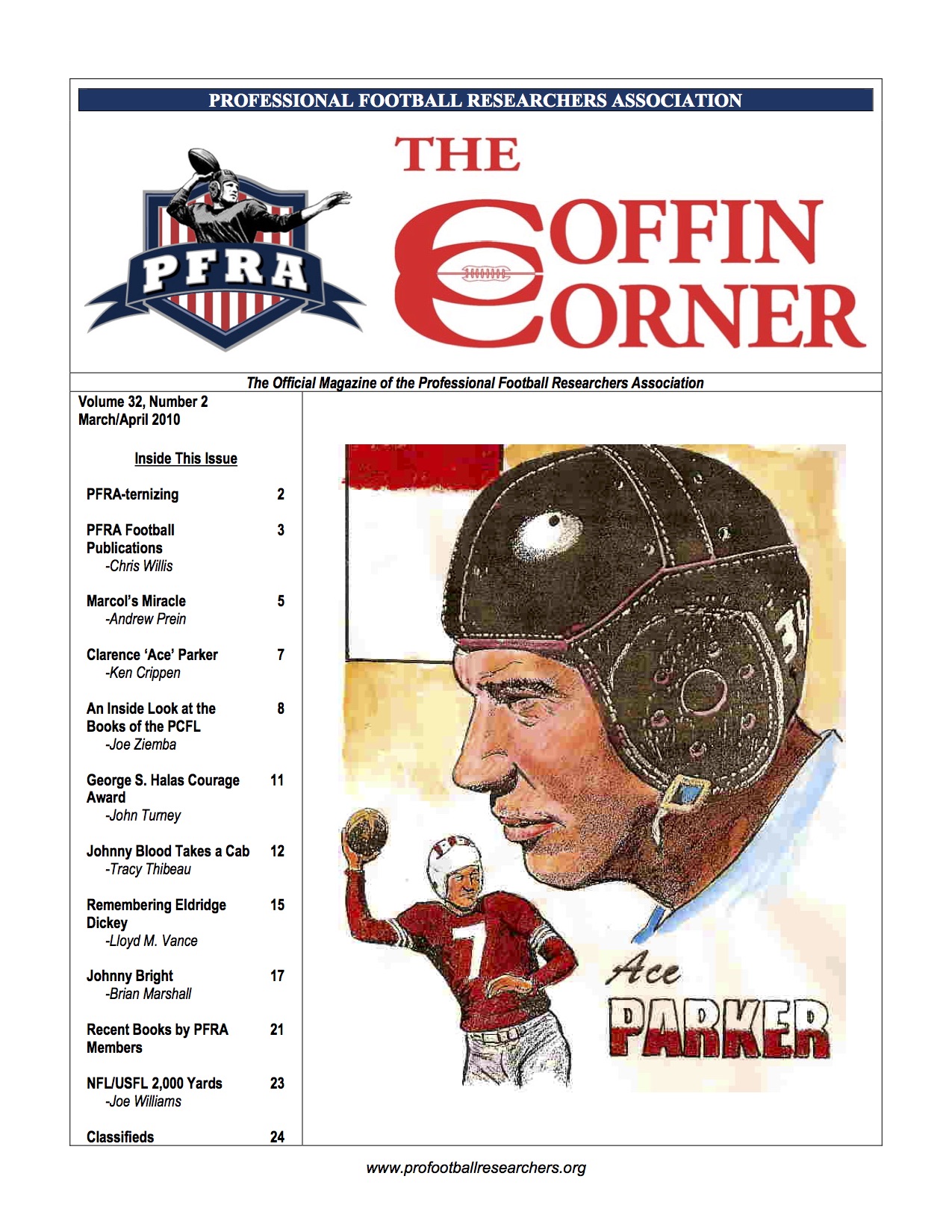 Marcol's Miracle by Andrew Prein. A detailed look at the bizarre ending to the 1980 season opening game between the Green Bay Packers and the Chicago Bears.

Clarence 'Ace' Parker by Ken Crippen. A biographical article on the oldest living Pro Football Hall of Famer (at the time of the writing of the article).

An Inside Look at the Books of the PCFL by Joe Ziemba. The author digs deep into the records of the Pacific Coast Football League to reveal the accounting of this minor league.

George S. Halas Courage Award by John Turney. A list of all winners of this prestigious award, as well as a brief history of the honor.

Johnny Blood Takes a Cab by Tracy Thibeau. A look at the Christmas Eve 1933 incident involving one of the league's most eccentric players.

Remembering Eldridge Dickey: A Pioneer Before His Time by Lloyd M. Vance. A biographical article on the first black quarterback to be drafted in the first round of the NFL draft.

Johnny Bright by Brian Marshall. A look at the Canadian Football League Hall of Fame running Back.

USFL Rushing Yards by Joe Williams. A list of all players who played in both the NFL and USFL who gained more than 2,000 yards. 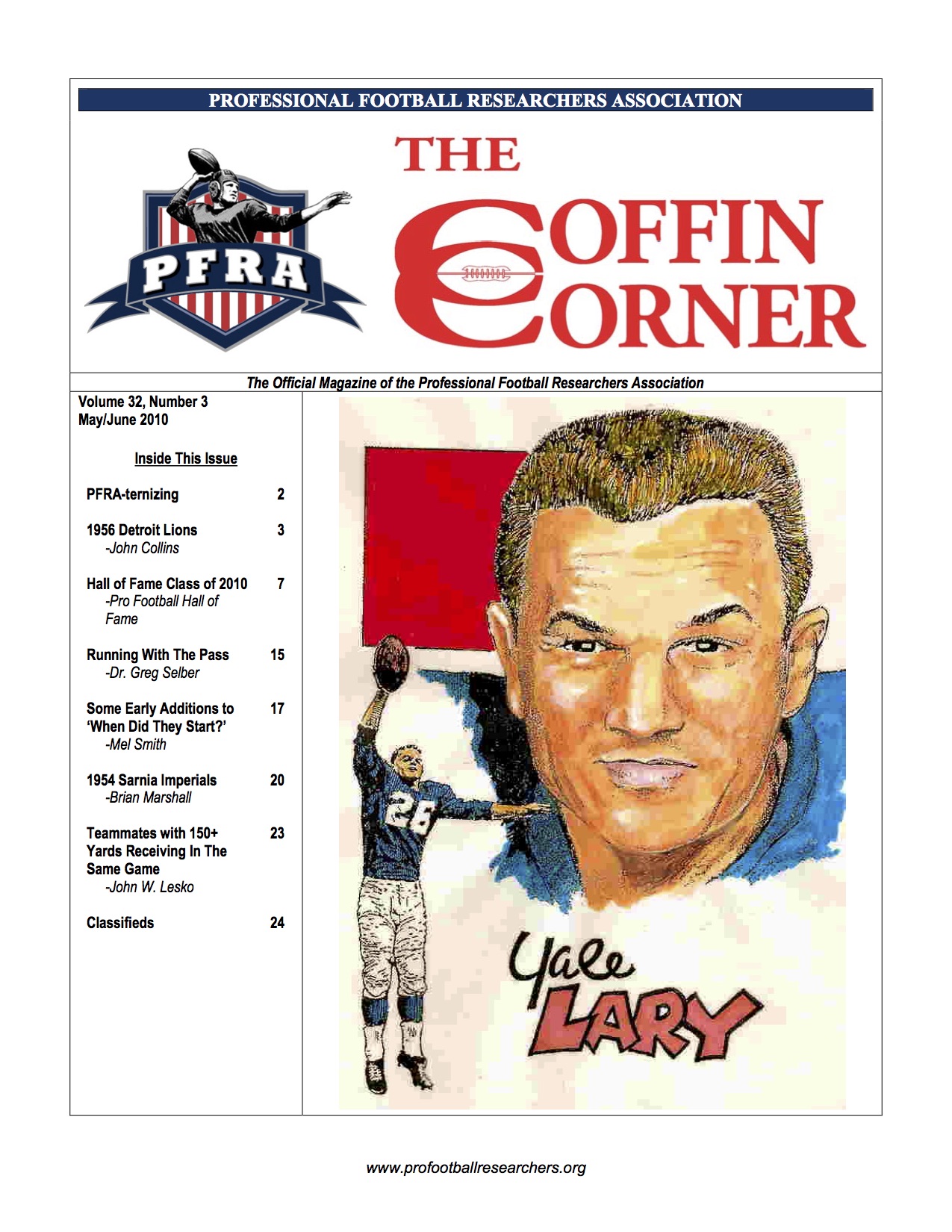 Running With The Pass by Dr. Greg Selber. Analysis of how the passing game has changed over the years.

Some Early Additions to 'When Did They Start?' by Mel Smith. An expansion on a previous article, detailing teams that started between 1882 and 1890.

Teammates with 150+ Yards Receiving In The Same Game by John W. Lesko. A listing of dual 150+yard games by receivers on the same team. 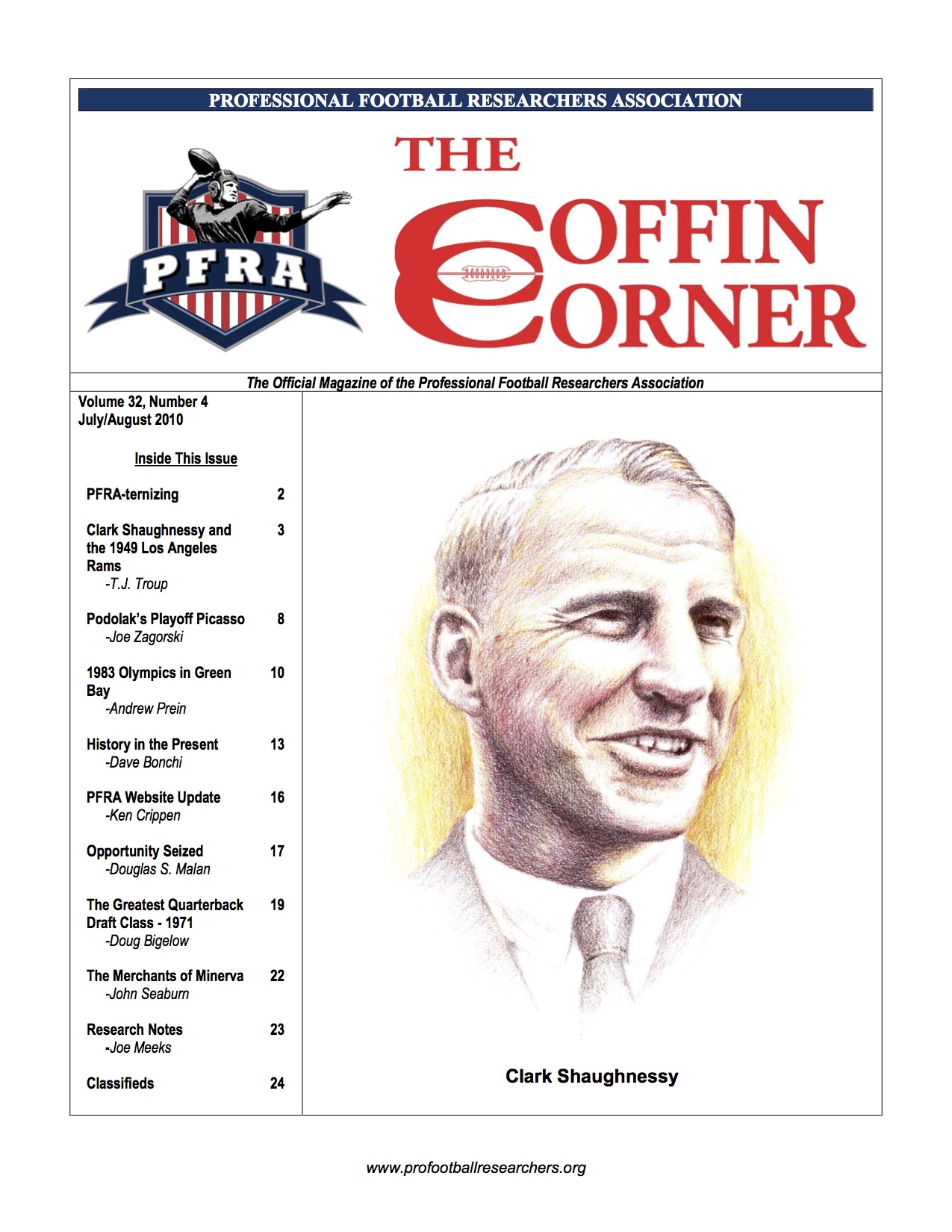 Podolak's Playoff Picasso by Joe Zagorski. A story about Kansas City Chiefs' running back Ed Podolak and the 1971 Divisional Playoff Game against the Miami Dolphins.

1983 Olympics in Green Bay by Andrew Prein. a detailing of the October 17, 1983 game between the Green Bay Packers and the Washington Redskins in which both teams combined to score 95 points.

History in the Present: Success Then Can Mean Success Now by Dave Bonchi. Coach Dave Bonchi goes into detail on the Wildcat formation.

Opportunity Seized: Muzzy Field and the Lost Game of the 1943 Green Bay Packers by Douglas S. Malan. A look at how the New London Diesels were able to schedule a game against the Green Bay Packers on November 28, 1943.

The Greatest Quarterback Draft Class - 1971 by Doug Bigelow. The author makes a case for the 1971 quarterback draft class being the greatest of all-time, over the Class of 1983.

The Merchants of Minerva by John Seaburn. A brief history of the Minerva Merchants, a semi-pro team from Ohio.

Research Notes by Joe Meeks. The author analyzes the 1933 rushing statistics, as well as the 1925 schedule of the New York Giants. 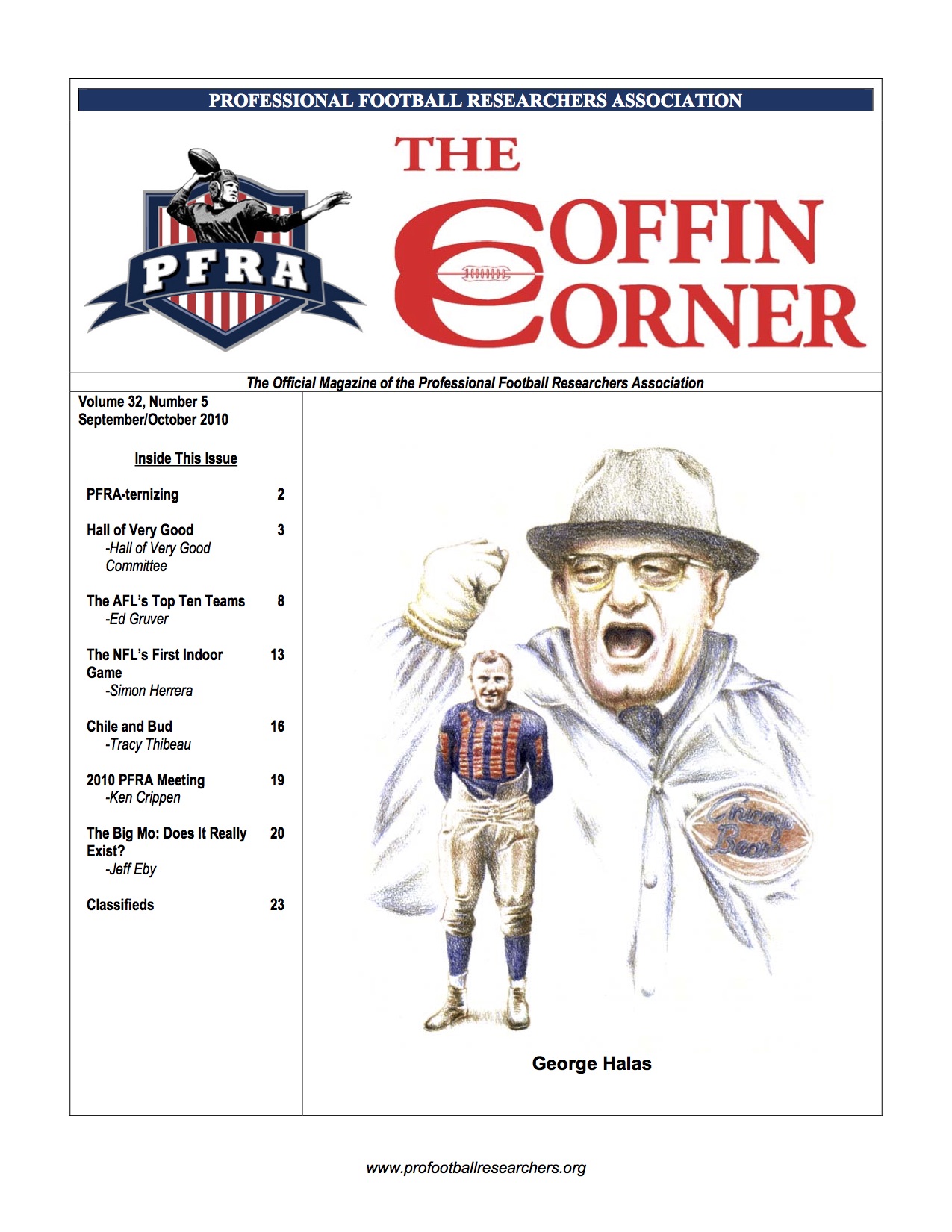 The AFL's Top Ten Teams by Ed Gruver. One man's opinion as to who the top teams were in the American Football League.

The NFL's First Indoor Game by Simon Herrera. On January 9, 1921, the Rock Island Independents battled the Decatur Staleys...or was it the Chicago Pullman Thorns. You will have to read the article to find out.

2010 PFRA Meeting by Ken Crippen. The executive director updates the membership on the bi-annual organizational meeting.

The Big Mo: Does It Really Exist? by Jeff Eby. A statistical look at winning and momentum heading into the playoffs. Does it really matter whether you win games at the end of the season? 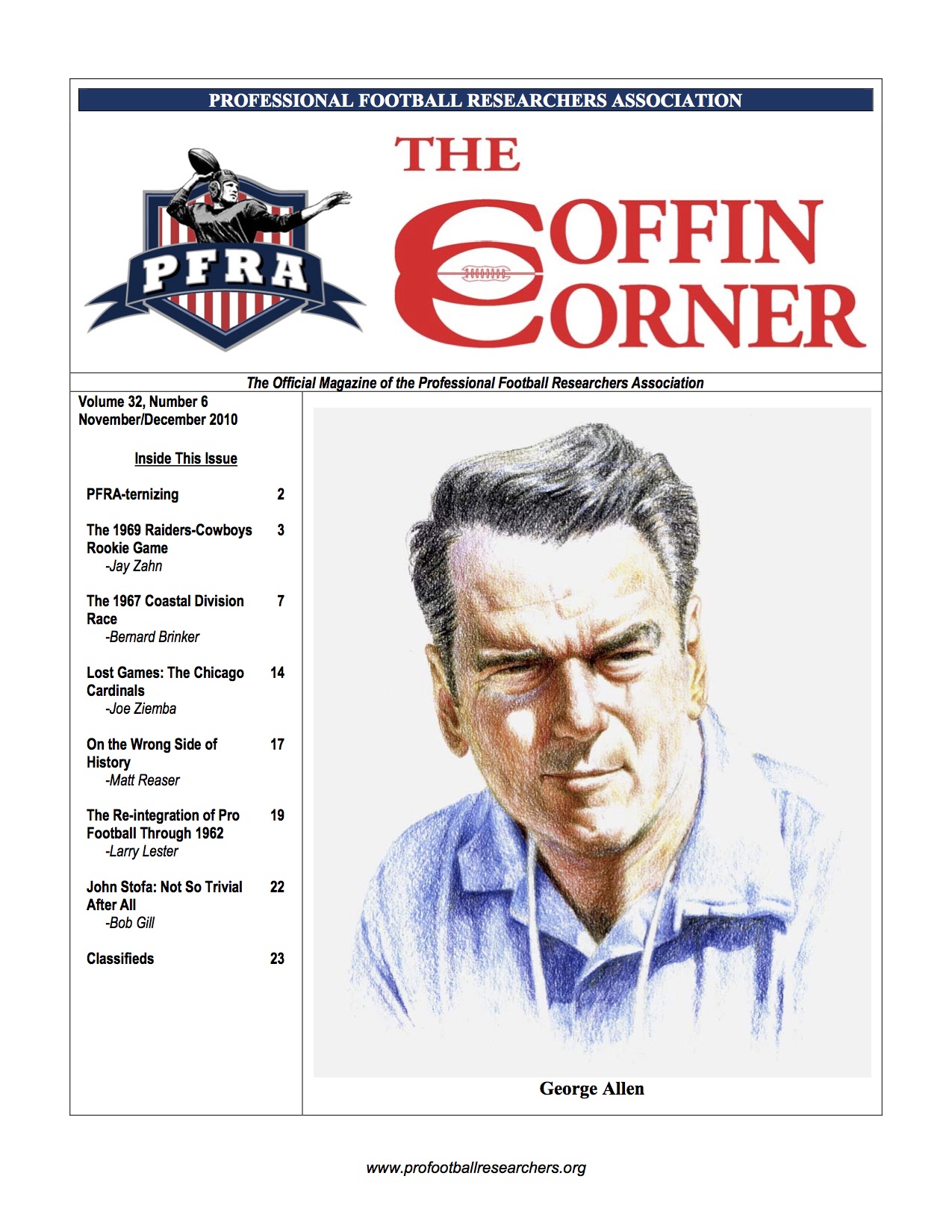 The 1969 Raiders-Cowboys Rookie Game by the Jay Zahn. A detailed account of the July 21, 1969 rookie game between the Oakland Raiders and Dallas Cowboys. This game marked the debut of Ken Stabler and Roger Staubach.

The 1967 Coastal Division Race: The Pit and the Pendulum by Bernard Brinker. Recounting the 1967 battle between the Baltimore Colts and Los Angeles Rams for the Coastal Division title in 1967.

Lost Games: The Chicago Cardinals by Joe Ziemba. A listing of the top ten "lost" games in Cardinals history.

On the Wrong Side of History by Matt Reaser. A look at milestone and record-breaking rushing performances against the Seattle Seahawks.

The Re-integration of Pro Football Through 1962 by Larry Lester. A listing of how each NFL and AAFC team re-integrated their franchise.

John Stofa: Not So Trivial After All by Bob Gill. A look at John Stofa's career.