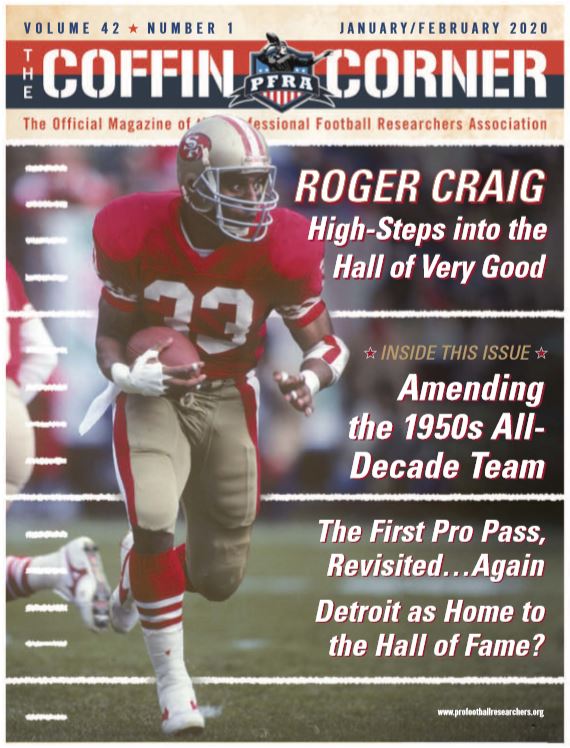 A Critique of the Official 1950s All-Decade Team by Andy Piascik. Piascik goes into detail on each selection of the 1950s All-Decade team as determined by the Pro Football Hall of Fame selection committee. Were these the best players of the decade? Were there better choices? An alternative team is proposed by the author.

The First Pro Pass, Revisited...Again by Gregg Ficery. Additional research by the author has discovered an earlier date to the first pro pass. Who was the passer and who caught the pass? The article details that game.

Detroit's Bid to Land Pro Football's Shrine by Richard Bak. A detailed account of Detroit's bid for the Pro Football Hall of Fame to be located in the motor city, instead of Canton. 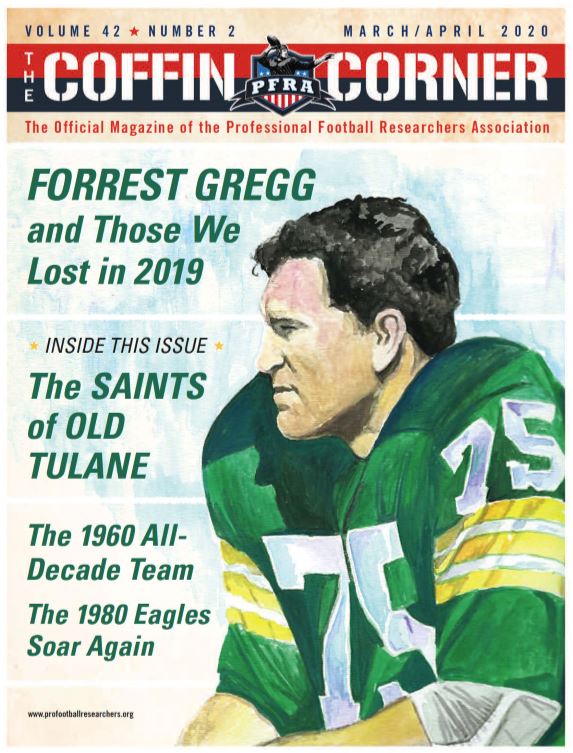 PFRA-ternizing. The PFRA Convention has been postponed to June 24-27, 2021. Details on hotel reservations are included.

The Saints of Old Tulane by Joe Zagorski. A season-by-season look at the years that the Saints played in Tulane Stadium (1967-1974).

When the Eagles Took Flight by Jimmy Grant. A look at the Philadelphia Eagles’ 1980 championship run and what led up to that season.

A Critique of the Official 1960s All-Decade Team by Andy Piascik. The author takes a look at the official all-decade team of the 1960s and proposes an alternative version. 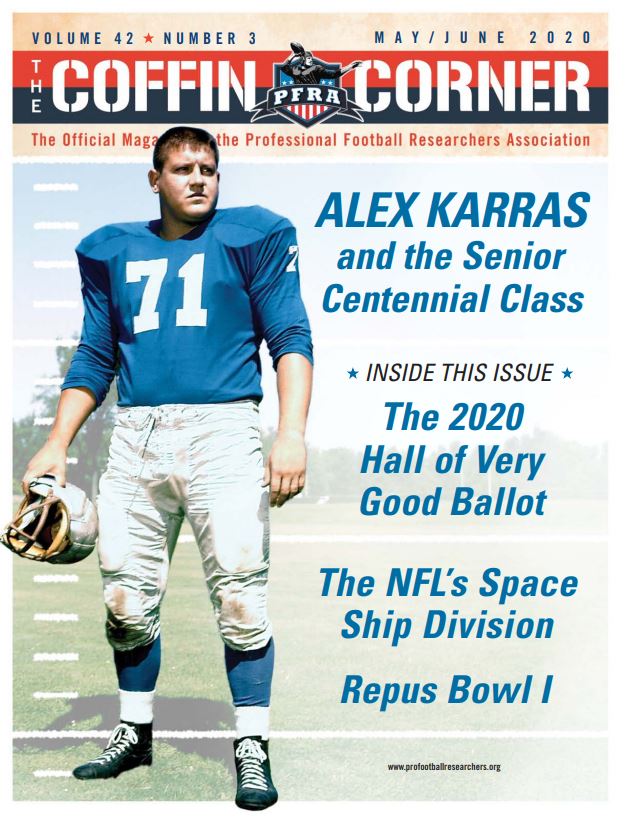 PFRA-ternizing. The PFRA's Biography Project has been launched. Also, an announcement on the passing of long-time PFRA president Jack Clary.

Official 2020 Hall of Very Good Ballot. The deadline for submitting your ballot is October 31, 2020.

The NFL's Space Ship Division by Richard Bak. The first NFL try at radios in the helmets, the 1956 experiment by the Lions when radios weren't that compact.

Repus Bowl I: November 27, 1983 by Denis M. Crawford. When 1-11 Tampa Bay and 1-11 Houston played the game billed as the opposite of the Super Bowl, deciding which team was the worst in the league. 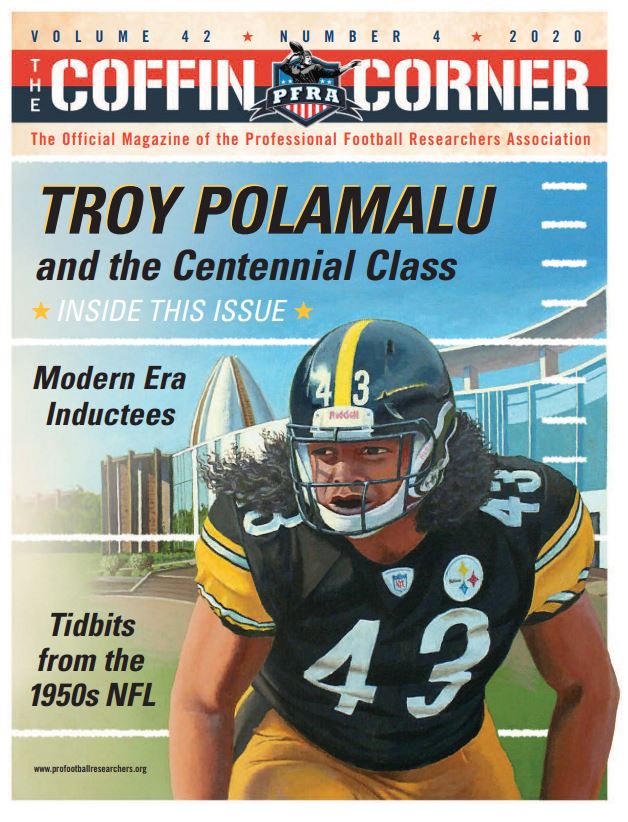 PFRA-ternizing. News on Rupert Patrick's final work, the new Jack Clary Award for service to the PFRA, and the Covid-19 pandemic that's changed the normal routine; as well as a PFRA member survey.

1950s NFL Tidbits by Andy Piascik. A look at the NFL's most stable era of the 20th century, the 12-team league with the 12-game season, Saturday night games on the DuMont Network, the two Cleveland Browns' teams ('51 and '53) with 11 Canton-bound players and coaches, and much more. 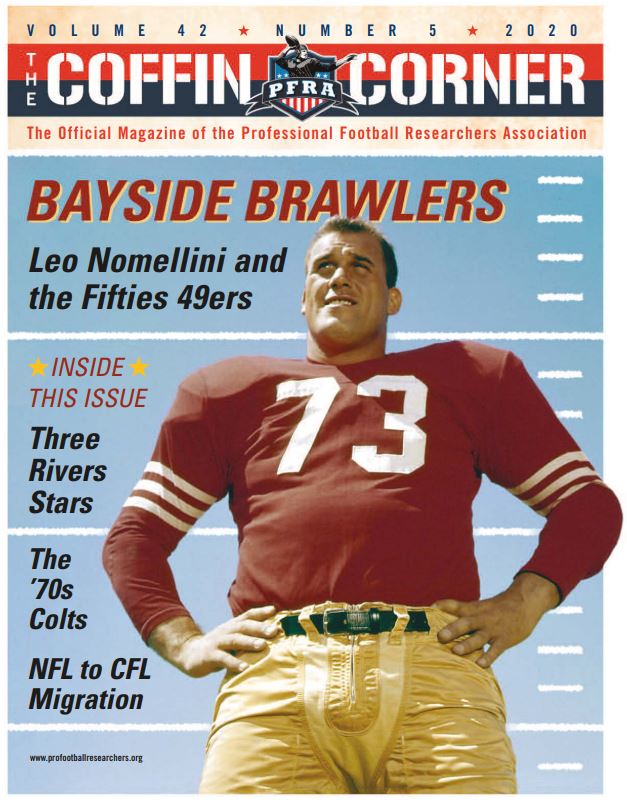 PFRA-ternizing. News about the 8 inductees to the HOVG class of 2021, and details about the rescheduled Canton convention on June 25-26.

Two Stars Are Born: The First Football Game at Three Rivers Stadium by William J. Ryczek. It was a preseason game on August 28, 1970 , between the Steelers and the visiting Giants, with a lot of firsts. Although it was on a Friday, the TV broadcast was also the pilot for the MNF team of Keith Jackson, Howard Cosell and Dandy Don Meredith, and the national TV debut of Terry Bradshaw and Bob Tucker.

Fists Flew When the 49ers Faced the Eagles by Joe Hession. A classic from the NFL's "Black Hat" era, September 25, 1953 at Kezar, with plenty of on field brawling interrupted frequently by an NFL game. The 49ers had future heavyweight boxer Charlie Powell, veteran pro wrestler Leo Nomellini, and Hardy Brown, "the meanest man in football". The Eagles had Pete Pihos and Al Pollard. Even the marching band and the San Francisco police got involved in the fighting.

"They Were Really Good!" The 1975-77 Baltimore Colts by Jimmy Grant. One of the greatest comeback stories of the 70s NFL, as Joe Thomas and Ted Marchibroda turned a 2-12-0 Colts team into the AFC East Division winner three years in a row.

Northern Migration by Ryan C. Christiansen. Looking back at 1953, when Bud Grant and Mac Speedie bolted the NFL for higher salaries in Canada.

2019 PFRA Bookshelf by John Maxymuk. The annual bibliography of pro football books written in 2019 and published in 2020, including those by PFRA members Richard Bak, Patrick Gallivan, Martin S. Jacobs, Tommy A. Phillips, Joe Zagorski and the late Rupert Patrick. 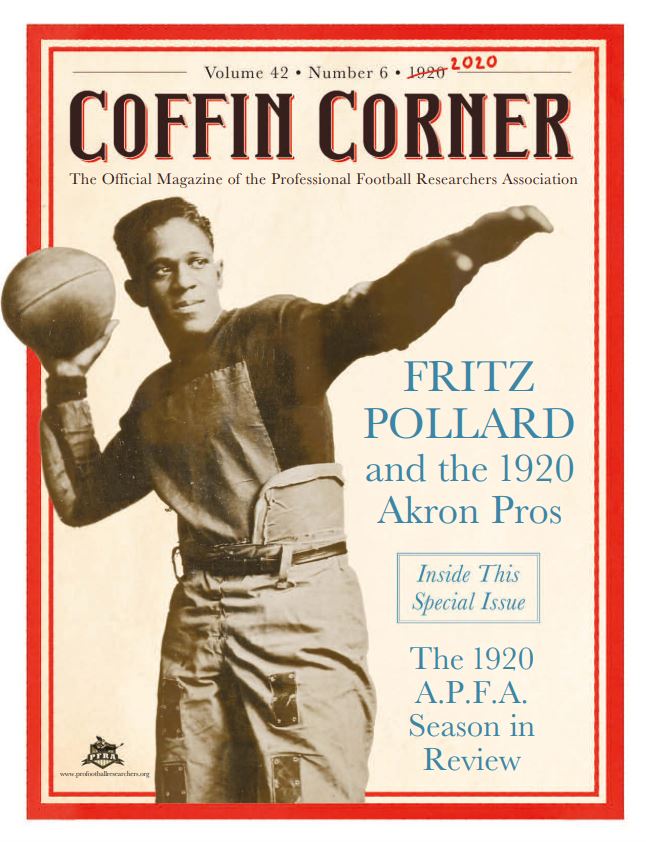 PFRA-ternizing PFRA wraps up 2020 with a record number of members, going over 400 for the first time.

The 1920 Akron Pros by C.C. Staph. A review of the first league champions, from their early days as an independent team through the end of their lone championship season.

The American Professional Football Association Season in Review, 1920 by M. Booth Lowrey. How the first season was viewed by the few pro football writers of 100 years ago, from the Akron Beacon-Journal to the Washington Herald.